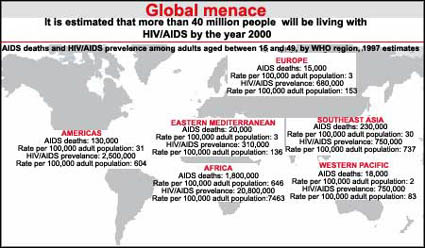 According to the World Health Organisation, about 31 million people in the world are living with 11IV or AIDS. Significantly, this includes-about one million children. In 1997, around 2.3 million people died due to AIDS, of which 1.8 million were among adults aged 15 and above. In 1995, about 75,000 infants who had received the virus from their mothers died before their first birthday. Most of these infant deaths occurred in the countries of sub-Saharan Africa. This region has the highest incidence of HIV/AIDS - about 7.4 per cent of the population.