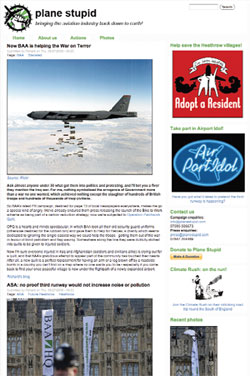 In June this year, an environmental group invaded an EU meet in Manchester, UK. Four members of the group released personal attack alarms attached to helium balloons and shouted anti-aviation slogans before leaving the building to unfold a large banner outside that accused delegates of being "criminals".

This website is the mouthpiece of the group in question: plane stupid. It has achieved notoriety for its extreme measures in pursuit of its goals, including invasion of airports and occupation of the runway.

The site puts plane stupid in a much sober light. A piece on the site calls Richard Branson's bluff. The Virgin Airlines head has often held biofuels as the key to "another 25 years of aviation growth". plane stupid members with another non-profit Action against Agrofuels show the solution is not a green one.