Our cities and small towns are reeling under severe air pollution made worse by the government's muddled approach to air quality planning. Only a court directive and public outcry have recently compelled the government and industry to get their act together. We will bring this air pollution update every month to inform you how far or close we are to winning our battle for clean air 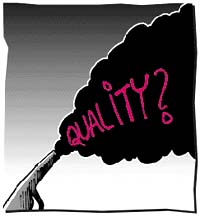 It came as a surprise when the Ministry of Petroleum and Natural Gas ( mpng ) recently informed the Environment Pollution (Prevention and Control) Authority ( epca ) that oil companies would be able to supply diesel with 0.05 per cent sulphur content in Delhi only by April 2001 and to the entire National Capital Region ( ncr ) in October 2002. Surprise because the Indian Oil Corporation (ioc) is already supplying this quality diesel in Delhi. mpng has always resisted pressures to improve fuel quality. But now it seems they are not even aware of what is happening in their refineries.

The Centre for Science and Environment ( cse ) has been following the improvement in diesel quality in Delhi ever since diesel with 0. 25 per cent sulphur content was introduced way back in September 1997. cse also began to investigate the actual status of diesel supplied in Delhi at present. This opened up a Pandora's box. Nobody in the government seemed to be sure about the quality of diesel Delhi was getting although the sulphur content in diesel has to be regulated in order to control particulate emissions.

Meanwhile, the move to supply diesel with ultra-low sulphur in Delhi has remained shrouded in controversy ever since the ioc announced in September 1999 that they would begin immediate supply of diesel with 0.05 per cent sulphur to the Delhi Transport Corporation ( dtc ). This in itself was a knee-jerk reaction to a similar offer from the private sector refinery Reliance. Fearing loss of market to the private sector, ioc acted fast to stave off competition. The ioc move was also a slap in the face of the mpng bureaucracy who had been maintaining till then, even in the Supreme Court, that it would not be economically possible to lower the sulphur content in diesel any further than 0.25 per cent.

When contacted recently, ioc stated very categorically that all their retail outlets in Delhi were supplying the improved quality of diesel with 0.05 per cent sulphur content. S K Mukherjee, chief quality control manager of the safety and environment protection department, ioc , holds that the company's diesel contains only 0.05 per cent sulphur and has been so since October 1, 1999. On the other hand, other oil companies have confirmed that they would be supplying this quality of diesel from April 2000. P J Chauhan, deputy manager with the Bharat Petroleum Corporation Ltd (bpcl ), said that all bpcl retail outlets were being supplied with diesel containing 0.25 per cent sulphur. He said their outlets would supply diesel with 0.05 per cent sulphur from April 1, 2000.

Meanwhile, dtc 's deputy chief general manager for store and purchase V K Saigal has confirmed that the entire amount of diesel being supplied to the company is of the variety containing 0.05 per cent sulphur. However, confusion still prevails as to how much 'clean' diesel Delhi is receiving of the total diesel supplied in the city.


Under severe criticism from the public and air pollution experts, the Delhi government has at last begun discussions on various proposals to reduce vehicular air pollution in the city. In a cabinet meeting held in February 2000, the government reportedly discussed the banning of private diesel vehicles with the capacity to carry up to 12 passengers. Other proposals discussed were registration of only four-stroke two wheelers from June 1, 2000.

The administration, directed by the Supreme Court to phase out old commercial vehicles, is now considering phasing out two-wheelers that are over 18 years old from June 1, 2000. There are also plans to gradually phase out 15-year-old two-wheelers from March 31, 2001 in Delhi. Moreover, discussions are on to convert all non-commercial vehicles of the Delhi government to run on compressed natural gas (cng), a cleaner alternative fuel. A plan has also been prepared to convert those government vehicles that are two to four-and-half years old to run on cng by June 30, 2000. Although no official decisions have been taken in any of these issues, it is nevertheless commendable that the state government is addressing them without being prodded by the court.
It took the ministry of surface transport almost 10 months after the Supreme Court order to enforce Euro II norms in the ncr by April 2000, to formally notify the norms under the title 'Bharat Stage II'. And the announcement came with just two months left for the automobile industry to meet this deadline.

The government notification takes note of the recommendation made by the epca that even the six-seaters and all multi-utility vehicles ( muv ) would have to meet the Bharat Stage II norms which otherwise had remained ambiguous in the Supreme Court order. These Euro II norms, were enforced in Europe way back in 1996 for new models of vehicles. The order also makes it mandatory to have commercial fuel like diesel available with 0.05 per cent sulphur content. The Society of Indian Automobile Manufacturers (siam) claims that they are prepared to fulfill these norms.