Six-fold increase in air pollution-related deaths in the past decade, says report that tracks disease causes across the world 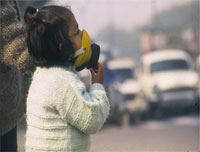 Outdoor air pollution has become the fifth largest killer in India after high blood pressure, indoor air pollution, tobacco smoking, and poor nutrition, says a new set of findings of the Global Burden of Disease (GBD) report. The report says that about 620,000 premature deaths occur in India from air pollution-related diseases each year. This is up from 100,000 in 2000—a six-fold increase.

The India and South Asia-specific findings were released on Wednesday at a dialogue workshop, jointly organised by non-profit Centre for Science and Environment (CSE), the Indian Council of Medical Research and the US-based Health Effects Institute.

The Global Burden of Disease (GBD) report is a world-wide initiative involving the World Health Organization (WHO), which tracks deaths and illnesses from all causes across the world every 10 years. The new findings were released by Aaron Cohen, principal epidemiologist of the Health Effects Institute and co-chair of the GBD Ambient Air Pollution Expert Group.

GBD has ranked air pollution as one of the top 10 killers in the world, and the sixth most dangerous killer in South Asia. In fact, particulate air pollution is now just three places behind indoor air pollution, which is the second highest killer in India. “This is a shocking and deeply disturbing news. This calls for urgent and aggressive action to protect public health,” says Sunita Narain, director general of CSE.

Among others who attended the release of the report and participated in the discussions were Union health secretary Kesav Desiraju, environment secretary of Delhi Sanjiv Kumar, and Vinod Raina, head of medical oncology department in AIIMS. Daniel Greenbaum, president, and Robert O Keefe, vice president, Health Effects Institute, shared the findings of the GBD assessment.

The India-specific analysis has been done using estimates of air pollution exposure at the national level and incidence of leading causes of deaths, aided by ground-level measurements, satellite remote sensing and models to capture population exposure. The GBD assessment follows a rigorous scientific process involving over 450 global experts and partner institutions including the Institute of Health Metrics and Evaluation, WHO, the Health Effects Institute, the University of Queensland, Australia, Johns Hopkins University and Harvard University.

In the wake of the GBD findings, CSE has analysed the latest air quality data available with the Central Pollution Control Board for 2010. Of the 180 cities monitored for SO2, NO2 and PM10, only two—Malappuram and Pattanamthitta in Kerala—meet the criteria of low pollution (50% below the standard) for all air pollutants. The trends:

Anumita Roychowdhury, CSE’s executive director for research and advocacy and head of its air pollution team, says: “Days of doubts and complacency are over. There is hard evidence now to act urgently to reduce the public health risks to all, particularly children, elderly, and poor. No one can escape toxic air. India will have to take aggressive action to reverse the trend of short-term respiratory and cardiac effects as well as long-term cancer and other metabolic and cellular effects. Remember, toxic effects like cancer surface after a long latency period. Therefore, exposure to air pollution will have to be reduced today to reduce the burden of diseases.”