A car free day keeps the chocking away

Delhi is reeling under a worse polluted winter than 2014. The odd-even formula empowers people to take the first step out of the gas chamber 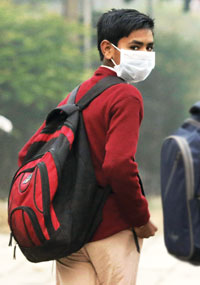 As Delhi gears up for odd-even system from January 1, 2016 a new analysis from the Centre for Science and Environment (CSE) shows that air pollution this winter has been worse than the last winter.

This is based on analysis of official air quality data from the continuous air quality monitoring stations of Delhi Pollution Control Committee by CSE.

According to this analysis, both November and December 2015 had more number of days in severe category then in 2014. This category is considered the worst according to the National Air Quality Index. In November, 73 per cent of days experienced severe pollution. This was 53 per cent in November, 2014. Similarly in December last year 67 per cent of days was in severe category as against 65 per cent in December, 2014.

Such high level of pollution this winter is a compelling reason for Delhi to pilot emergency actions like odd-even system and closure of the Badarpur thermal power plant among others.  This is needed to reduce toxic exposure. Vehicles emit some of the worst toxins and toxic gases within our breathing zone.

If half of the cars is off from Delhi’s roads, the total toxic load of particulate matter (PM), and nitrogen oxides from the car segment will also come down by 50 per cent. Total toxins including benzene, PAH and other cancer causing substances can also be controlled by reducing number of vehicles running on Delhi’s roads. More reduction is possible from diesel cars and SUVs.

A user of single occupancy petrol car meeting Bharat Stage IV standards can reduce per capita particulate emissions per kilometer by at least two times by using a CNG bus. Benefit will be higher if the shift is from cars meeting older emissions norms.

A user of single occupancy diesel car meeting Bharat Stage IV can reduce per capita particulate emissions per kilometer by at least 40 times by using a CNG bus. If the shift is from diesel SUV the reduction will double.

The car pool strategy will reduce the per capita emissions by four times from the same car. Metro ride is a zero-emission activity in the city (this does not account for emissions from electricity generation).

Toxic effect of vehicular fume on our health

From public health perspective it would be misleading to underestimate the impact of vehicular pollution that occurs very close to our breathing zone. The Kanpur IIT study has shown that in winter vehicles are the second largest emitters of PM2.5 after road dust if both combustion sources and dust sources are considered. But it is the top emitters among the combustion sources in winter.

Moreover, in different parts of Delhi diesel fueled four-wheelers are the source of at least 60-70 per cent of the PM2.5 in winter. Several other studies in Delhi have shown how real time exposure on roads and close to road side is several times higher than the background ambient levels.

More than 55 per cent of Delhi’s population lives within 500 meters from some roads. Therefore, most of Delhites are within the direct influence of toxic vehicular pollution.

Vehicular emissions contain some of the deadliest toxins like polycyclic aromatic hydrocarbons and benzene. More toxins are found in diesel emissions.

Serious health impacts have been associated with emissions from traffic. A recently released mega study in the US by the Health Effect Institute has implicated PM2.5 from diesel and coal with increased incidence of deaths due to ischemic heart disease.

This is serious given the fact that India’s global burden of disease estimates have found half of the premature deaths due to air pollution related diseases in India are due to heart ailments.

Global studies have linked air pollution with cardiovascular diseases, respiratory disorders and various allergies. Pollution may also be associated with central nervous diseases like Parkinson’s disease, stroke and Alzheimer’s disease. Higher incidence of respiratory and cardiac symptoms, stroke, and effect on brains of children are found in areas close to traffic pollution.

The odd-even number system needs to be enforced with stringency to help promote alternative commuting practices and systems that can be sustained for a longer term solution. Given the level of choking pollution in the city and its health impact Delhites need to support this programme to reduce their pollution foot print.