A forecast by the Ministry of Earth Sciences’ System of Air Quality and Weather Forecasting and Research (SAFAR) shows that the peak particulate matter (PM) level would rise considerably this year during Diwali due to the prevailing weather conditions.

A health advisory issued by SAFAR stated, “Everyone should avoid all physical activity outdoors; people with heart or lung diseases, older adults, and children should remain indoors and keep activity levels low….” from the night of November 11 till the afternoon of November 12.

SAFAR added that it can be assumed as a “health warning for all” as it can pose a “serious risk of respiratory illnesses in general public (due to) prolonged exposure”.

Last year, on the day of Diwali, the PM 10 levels peaked 450 mg per cubic metre. This year, according to the forecast, SAFAR scientists said it would go up to 956 micrograms per cubic metre by November 12.

SAFAR scientists have predicted that Noida and Delhi University will witness the highest pollution level while Lodi Road and Mathura Road will witness the least pollution. Particulates across the world have been known to cause infection in the respiratory tracts. The World Health Organization also considers it a Group 1 (carcinogen), which means it can directly cause cancer. 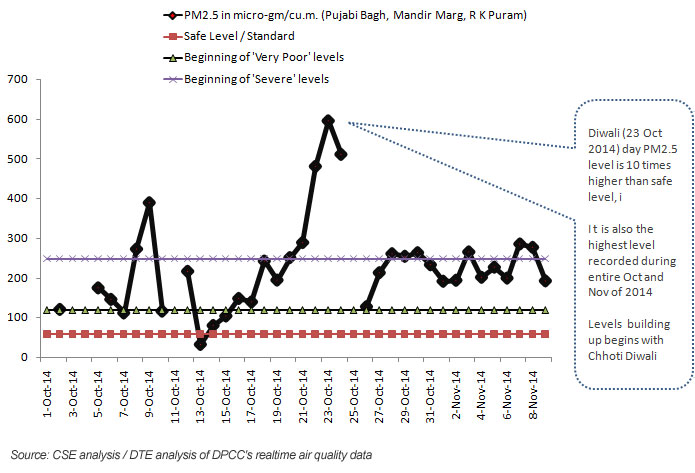 Peak pollution hours will begin at 1 am on November 11. This forecast is based on the prevailing weather condition, assuming that the number of crackers set off remain the same as last year.

Project director of SAFAR Gufran Beig said, “Air quality this Diwali may remain inferior compared to last year, primarily due to the weather. Cooler temperature and downward shift of the inversion layer means Delhi will breathe severe air for at least a day immediately after Diwali.”

Beig added that this, in turn, may lead to hazy and cold days ahead. “Under this condition, particles emitted from fireworks will sit on water droplets and cause them to multiply, resulting in more particles in suspended air .This process is called secondary particle formation. It is likely to happen on November 12 and 13,” he said. This, according to scientists, will lead to dense haze formation. Scientists said that this year, the spike in particulates has been of particular concern.