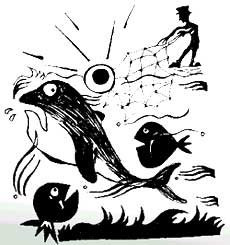 FISHING nets could trap and kill porpoises that venture near the shore in search of a fish dinner. Such an occurrence was getting rather common along the shores of New England in the us. To stem this, wildlife scientists, environmentalists, engineers and fisherfolk got together to find a technical solution to the problem. Their efforts have resulted in an underwater acoustic alarm called a pinger which, when mounted on a net, would prevent porpoises from entangling themselves without scaring away fish that are targetted (Scientific American, Vol 275, No 3).

Acoustic deterrents had earlier been rejected by some scientists. "We had been blinded by the literature that said they did not work," admits Scott D Kraus, a marine biologist with the New England Aquarium at Boston. Despite the criticism, members of an informal 'harbour porpoise working group' decided to approach Jon Lien, a professor of animal behaviour at Memorial University in St Johns, Newfoundland, us, who had been successfully using acoustic devices to prevent whales from colliding with fishing gear for some time.

Their first attempt at using Lien's pingers in 1992 showed a remarkable reduction in the entanglement of porpoises. Yet, naysayers complained that fisherfolk had placed the pingers in areas they knew would be free from porpoise traffic. So in 1993, with a us $9,000-grant from the us National Fisheries Service, Lien and the fisherfolk of New England launched a more elaborate experiment. Using new pingers that were constructed on the spot, the test nets were deployed in an arrangement that kept the control nets in proximity to the animals. This was done to avoid the possibility of experimenter bias. Interestingly, nets fully outfitted with pingers trapped only one harbour porpoise and those without the devices caught 32 porpoises. But critics once again found reasons to complain.

This time the working group went up to the us Congress and lobbied in favour of a largescale and statistically controlled trial of the device. Their efforts bore fruit as the Congress approved of the study and granted them the funds for it. The experiment monitored more than 10,000 fishing nets, each the length of a football field. To rule out any bias, all the nets were fitted with the device but only half the pingers were switched on. The purpose was to prevent participants from distinguishing live pingers from the rest while deploying the nets.

The experiment clearly demonstrated that pingers deterred porpoises from getting caught in the nets. Reportedly, in the final count, 25 porpoises got trapped in the control nets, while only two were found in an equal number of nets outfitted with working pingers. Incidentally, one of the two happened to be deaf.