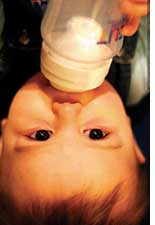 The Canadian government has announced that it intends to ban the import and sale of baby bottles that contain a potentially dangerous chemical, bisphenol A.

Bisphenol A (bpa) is a common plastic ingredient that is used to make polycarbonate plastic, which mimics glass but is lighter and shatter-resistant, and epoxy resins, which are used in can liners to prevent corrosion and food contamination. More than three million tonnes of the chemical are used worldwide in a year in hundreds of household goods, from dvds and eyeglasses to baby bottles and water bottles.

Studies have linked exposure to bpa --which can rapidly leach out of plastic bottles when exposed to hot liquid--to damage in developing brains, early puberty as well as a heightened risk of cancer later in life (See 'Packaging poisons baby food', Down To Earth, January 31, 2008).

"In most instances, negative effects occur at levels much greater than those we are exposed to. That is not the case for newborns and infants. Early development is sensitive to bpa," Canadian health minister Tony Clement said at a press conference. "We have concluded that it is better to be safe than sorry."

The Canadian government did not, however, move to ban the use of epoxy resins in coatings inside infant formula containers. "For infant formula cans, there are no alternatives to date to reduce bpa," Clement said. "We will work with industry to reduce the level of bpa in the lining of cans and find alternatives as soon as possible." The proposal is now open for 60 days of public comment.

Canada's announcement comes shortly after the us government's National Toxicology Program (ntp) --an agency that coordinates the federal government's studies of various chemicals' adverse effects--acknowledged "some concern" over bpa. In a report released on April 14, it warned that "the possibility that bisphenol A may alter human development cannot be dismissed." The report also says that contrary to manufacturers' previous claims, humans are exposed to significant levels of bpa.

Following ntp's report, the American Chemistry Council has called on the us Environmental Protection Agency and the Food and Drug Administration to re-examine bpa.

Meanwhile, several baby bottle manufacturing companies and retailers in Canada and the us have started taking measures to strip all polycarbonate-laced beverage bottles from store shelves in response to consumer demand.