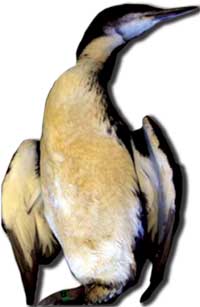 A chemical released by algae blamed

hundreds of wintering seabirds were reportedly found dead on the shores of Monterey bay, usa, towards the end of 2007. Feathers of the birds were coated in a foamy yellow-green substance. A team of researchers traced the substance to an unusually large red tide in the bay caused by the algal species Akashiwo sanguinea.

Monterey bay is home to a large number of marine animals. It is second only to San Francisco bay, US, in harbouring migratory sea ducks.

About 550 birds were stranded and 207 were found dead in November-December, 2007. Closer view of the birds' stained feathers revealed that their natural weather-proofing was gone. The live birds had severely low body temperatures. With proper care they recovered. This proved the foamy material was not toxic.

A scientific team led by David A Jessup from the California department of fish and game, US, used oil spill washing procedures to extract the slimy material. On analysis, it turned out to be proteinaceous with surfactant-like properties. It also exhibited properties like those of compounds released during algal blooms.

The team cultured species of Akashiwo sanguinea isolated from Monterey bay and found it to produce the same compound after it senesced. When the cultures were vigorously shaken the compound turned foamy. In the bay it was wave action that turned the compound foamy. This foam damaged the feathers' natural oil glands saturating them with water, explained the study.

"Monterey bay is a region that constantly produces red tides. Such regions are a good source of nutrients. These are apt for algal growth," said Raphael Kudela, associate professor of Ocean Sciences, University of California, US, and one of the paper's authors. Osaka Bay, Japan, is another example.

An oil spill took place in November 2007 at the San Francisco bay area, affecting 1,000 birds. To rule out the possibility of a similar oil spill incident, the researchers analyzed seawater from the Monterey bay. The results were negative for petroleum compounds.

Algal blooms cause large-scale deaths of marine animals. One of such severity has been documented for the first time, said the paper released in PLoS ONE on February 23. "Since 2004, the red tides are occuring more often and for longer durations at Monterey bay. Global warming has led to an increase in surface temperatures of the coastal waters. The algae prefer such conditions," added Kudela.