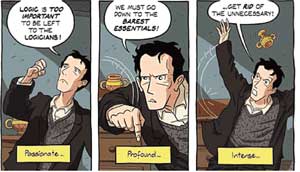 Mathematics is hardly a fitting theme for a comic, but a new graphic novel from Greece about math in 20th century Europe has become an unlikely hit.

Logicomix: An Epic Search for Truth follows British philosopher Bertrand Russell in his quest for the foundations of mathematics, and his search for logic as a shield from the insanity that consumed his family. Published in Greek in 2008, Logicomix was a hit at home. It occupied top 10 spots in book rankings on Amazon.com and Ama-zon.co.uk. It topped The New York Times paperback graphic book list. I think the publishers (Bloomsbury) were shocked, Apostolos Doxiadis, who co-authored with computer science professor Christos Papadimit-riou at the University of California, in usa told news agency afp. The novel took seven years to complete.