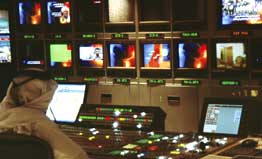 Al-Jazeera, the Qatar-based Arabic news network that has become a great bugbear for the us, has launched an English-language channel: Al-Jazeera International. This channel retains the Arabic logo and is also based in Qatar. Many non-Arab journalists, including British television icon, David Frost, abc I nternational anchor, Dave Marash and cnn's Riz Khan are expected to join. Correspondents and producers from the Arabic channel will help, said Abderrahim Foukara, Washington bureau chief for Al-Jazeera, Arabic.

Al-Jazeera executives and journalists are optimistic that the new offshoot will draw British and American viewers as also other English speakers as an alternative to cnn and bbc. But its critics, led by Accuracy in Media, a conservative Washington group, worry that the new channel will be a facsimile of the Arabic channel. But Al-Jazeera has chosen to play it safe--at least for sometime. "While anchors and reporters for Al-Jazeera's Arabic channel refer to Palestinians killed by the Israeli military as "martyrs", using the prevailing lexicon among Palestinians and many Arabs and Muslims, the English-language journalists are likely to avoid that term," Foukara said. The new channel, like its predecessor, will focus on reports that highlight the human and civilian dimension of conflict, he added.

Love it or hate it, Al-Jazeera has, in just its tenth year, established itself as a formidable media presence. A 2004 survey, by the online magazine brandchannel.com, voted it the fifth most recognisable brand in the world, behind Apple, Google, Ikea and Starbucks.