All birds in one tree 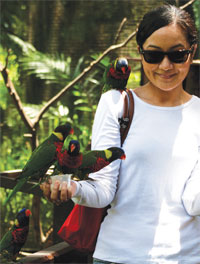 AN INTERNATIONAL team of scientists has ruffled the feathers of old beliefs on evolution in birds. Using rigorous taxonomical classification and DNA-sequence data, the researchers have developed world’s most comprehensive phylogenetic tree linking all the 9,993 identified bird species. The tree shows that contrary to popular belief the diversification rate in birds is accelerating.

The study, published in Nature on October 31, uses the branching pattern of the tree to represent the evolutionary relationship between different bird species. As the tree developed, scientists observed interesting diversification patterns in bird species. They had expected to find geography and lineage-specific variations in different bird species. Several experts had suggested that the rate of evolution would be higher in the tropics, as up to 75 per cent of all bird species are found there, and that birds living in the islands would show more diversity due to a restricted gene pool. The results, however, quashed some of these beliefs.

“We did find increased diversity in islands, like the song bird species that populate the Pacific, North Atlantic and Caribbean islands. However, we did not find any increase in the rate of evolution in the tropics with respect to the world wide rates,” says Arne Mooers of Simon Fraser University in Canada. He is one of the researchers behind the study that provides experimental data to test existing theories about bird diversification.

While it was expected that the diversification rate would be slowing down, the scientists found it is accelerating instead, especially in North and South America.

Alternatively, the rate was lower in Australia, Southeast Asia, Africa and Madagascar. Other than the song birds, rapidly evolving species include types of waterfowl, such as ducks and geese, gulls and woodpeckers, the study said. “I believe we have to devise new tests to understand various factors that regulate the production of species. Future studies need to be designed keeping that in mind,” says Mooers.

Initial steps towards building the tree involved comparing DNA sequences of all known bird species. Those with similar sequences were placed together on the tree, as most of the similarity is due to shared ancestry. Mooers says closely related species differ only at a few base positions. Researchers used fossil data to find an anchor or the original ancestor and age of a group.

Albert Phillomore, a scientist at the Institute of Evolutionary Biology of the University of Edinburgh in UK, says, “This paper represents the biggest advance in our understanding of the bird tree of life in two decades. It builds on the contribution of hundreds of small studies and I think this tree will be used in hundreds of future studies.” He says a good aspect of the study is that species lacking DNA sequence data too are inserted into the tree.