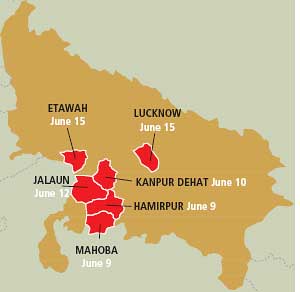 The Uttar Pradesh government is hard at investigating widespread land subsidence in several districts during the second week of June this year. According to the Geological Survey of India (gsi), Lucknow, cracks appeared in districts Hamirpur, Mahoba, Jalaun, Etawah, Lucknow and Kanpurdehat (see map: Caving in). Measuring up to 3.5 m in width and 1m in depth, the cracks sparked off fears of an earthquake, an assumption gsi, Lucknow and the chief secretary strongly denied.

According to the district magistrates, the district of Hamirpur witnessed cracks in three out of four blocks, Mahoba in four out of seven blocks; Lucknow had cracks at two places, Etawah and Jalaun one place each. Most of this tract has alluvial soil with underlying clay and hard rock, the latter making it difficult for water to seep deep inside, so reducing recharge and availability of groundwater.


According to Deepak Srivastava, deputy director, gsi, Lucknow, the subsidence was a result of the "sudden release of tension from below the earth surface due to heavy rainfall after a prolonged period of drought". Officials informed Down To Earth (dte) that the affected regions have suffered drought or below average rainfall for the past five years, until the skies opened up: up to 309 mm in Mahoba, 90 mm in Jalaun and 36 mm in Hamirpur.

As per Srivastava, due to prolonged drought and "excessive extraction of groundwater", the inner layer of the soil/earth in the affected areas became dry and developed voids. After the rain, the top-most layer of aquifers got recharged, exerting pressure on underlying voids and clayey strata, in some cases causing the land to subside. Some local experts also point out that the excessive withdrawal of water, using cavity wells, would have led to a change in soil moisture levels, so causing the cave-in. The state groundwater department has ruled out this theory.

Speaking to dte, hydrologist R S Sinha, state groundwater department, admitted the districts where subsidence occurred fall under the category of "safe zones" with respect to groundwater extraction, but maintained they are "groundwater scarce regions". According to Sinha, the affected regions are low on groundwater availability due to lower rates of recharge and high run-off, of about 70-80 per cent.

But D Muralidharan, scientist, Hyderabad-based National Geophysical Research Institute, completely rules out the subsidence theory. According to him, "rainfall after a prolonged period of drought can only lead to waterlogging or swelling of land but not subsidence. Therefore, the tectonic shift, leading to cracks and subsidence, cannot be ruled out." The government department confirmed the cracks were reported within a day of rainfall in all the districts.


gsi officials told dte that Farrukhabad (1995), Allahabad, Gazipur and Kanpurdehat (2006) and Hamirpur and Banda (2007) had experienced subsidence. Surprisingly, authorities took no initiative to study why. But now, the state government has sprung into action. It has decided to table a much-delayed bill regarding groundwater regulation and development. Circulated by the Union government to all state governments and Union Territories in 1970, 1992, 1996 and 2005, the state government had been shying away from introducing the bill for political reasons. Here, the stage of groundwater development is 70 per cent.

According to M M Ansari, director, state groundwater department, the bill, to be called the 'Uttar Pradesh Groundwater Conservation, Protection and Development (Management, Control and Regulation) bill', will check over-exploitation and promote groundwater recharge. He points out, "For instance, the bill envisages a provision for the installation of recharge facilities in any building premises having an area of more than 300 sq m." The department is giving shape to the bill.