All rivers to Delhi?

In their greed for more water for the capital city, planners duck the question of wasteful expenditure of local water sources 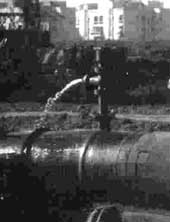 DELHI already gets water from Beas Sutlej, Ganges and Yamuna rivers and the Yamuna canal after exploiting all its groundwater sources. Four large dams are waiting to begin supplying water to the city. There is even a proposal to bring water for Delhi from dams to be built in Nepal through a 370-km canal. And yet, there is more asking for water from rivers like Chambal, Chenab and Ghaggar to relieve the urban thirst.

At a seminar-cum-workshop in held in New Delhi on November 22-23, organised by the Indian National Trust for Art and Cultural Heritage (INTACH), on "Water Resources of National Capital Region: Problems and Alternatives", bureaucrats were busy projecting the water demand of the NCR (National Capital Region) for AD 2001, 2011 and 2051. The Central Water Commission (CWC) officials pushed for the upstream dams Tehri (to supply 300 cusecs) on Bhagirathi river in the Ganga basin, Kishau dam on Tons river (to supply 689 cusecs) and Renuka dam on Giri river (to supply 512 cusecs) - both in the Yamuna basin - to satisfy the NCR's demands Upto AD 2011.

The National Water Development Agency (NWDA), however, regarded these additional supplies as insufficient after AD 2011, and proposed building the Sarda-Yamuna link canal for an annual additional water supply of 3,000 million cubic m (MCM) to Delhi. To justify the projects, "appropriate" population projections were made. So, while the CWC projected that the NCR's population will go upto 550 lakh in AD 2050, the NWDA projected that the population will soar to 694 lakh in AD 2050.

The other argument was that 85 per cent of the annual river water flow is available in monsoon and only 15 per cent in the non-monsoon months. Here too, the role of local water harvesting in changing this flow regime was glossed over. While INTACH, and most notably, the Central Ground Water Board (CGWB) talked about augmentation of local water resources through harvesting, recharge and recycle these were rather strangely term simply as "short-term and medium-term" measures.

Omesh Saigal, member secretary of the NCR Planning Board, said that there are areas in Delhi which get 650 Ipcd (litre per capita per day), and some other areas get as little as 25 Ipcd, while the average Delhi water supply is 220 Ipcd; but there was no recommendation to control unjustifiable and wasteful use. The Delhi Water Supply and Sewerage Board officials were defensive about demand side management through proper water pricing, even after agreeing that domestic water supply is subsidised upto 80 per cent and sewage collection and treatment is subsidised upto 100 percent.

According to INTACH, there is potential to harvest rainwater upto 760 MCM, to store excess flood discharge in the rivers upto 500 MCM and to recycle sewage upgraded through ecoparks upto 700 MCM in the NCR. This totals upto 1,960 MCM, compared to the projected total annual urban water demand of 3,100 MCM in the NCR in AD 2001.

However, as Bharat Jairaj of Worldwide Fund for Nature pointed out, there has been little progress in this direction since a June 1995 meeting organised by INTACH. The Delhi government has been recommended to amend building bylaws to make rooftop harvesting of rainwater compulsory in Delhi, which is yet to be implemented, said CRGWB chairman Arun Kumar. One important sidelight - the channelisation of the Yamuna and river front development on reclaimed lands on the river banks that the Delhi government is actively considering, was strongly opposed by several participants.

Rajendra Singh of Tarun Bharat Sangh (TBS) from Alwar, Rajasthan (part of the NCR) pointed out the importance of local water harvesting. The TBS, over the last decade, has helped constructing over 1,100 johads (traditional village wells) in Alwar's villages. This has substantially arrested human migration to cities, and helped rejuvenate two local rivers, which used to dry up after monsoon just a few years ago.