All the hair in place, just in time 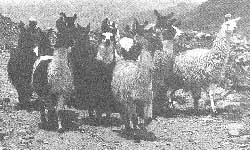 AN ARGENTINE scientist may finally have found a hirsute way to solve a long-standing anthropological poser. Carmen Reigadas of the Instituto de Ciencias Antropologicas in Buenos Aires has come up with a new approach to determining exactly when South Americans turned away from hunting camelids such as guanacos and vicunas and started herding llamas and alpacas.

Archaeologists couldn't date this changeover with the help of animal teeth and bones because they had difficulty differentiating between the species. Reigadas' approach entails identifying the species by examining hair fibres and follicles, which the extremely arid conditions at the sites of their findings have helped keep intact. An analysis of the dimensions of hair, she hopes, will help distinguish the hair of the llama and alpaca from that of the guanaco and vicuna. Simple carbon dating could then fix the age.

Most mammals have two coats -- the undercoat of short thin fibres and the kemps, and hair of coarser fibres. With domestication, the size of the primary follicles, from which kemps grow, decreases and the number of secondary follicles, which house the undercoat, increases. Besides, the kemps become thinner. Researchers had earlier found that with the domestication of sheep in the Old World an intermediate coat had appeared between the undercoat and kemps.

Reigadas discovered that 82 per cent of the coat of the present-day vicuna was dominated by fibres less than 25 micrometers (one-millionth of a metre) thick. The rest of the hair was upto three times thicker. Samples showed 70 per cent of the hair of a guanaco was between 26 and 46 micrometres thick and 20 per cent was very thick. There was, however, a lack of very thick and very thin fibres on the domesticated llama.

Hair samples of guanacos and vicunas from the cave of Huachichocana III, believed to have been periodically occupied over a long period of time, were 10,200 years old. In the 3,400-year-old layer of soil, vicuna hair samples and the skull of a llama were found. However, the 1,420-years-old samples of fibres in the upper layers of the same cave were mixed. Reigadas found a cordage sample made from vicuna hair, but three samples were of intermediate thickness, which clearly came from llamas.

Similarly, in later samples, the intermediate coat was more dominant, when the cave came to be increasingly used as a corral. This, Reigadas points out, suggests that hunting was either being complimented or replaced by herding around this time. She, however, reckons that domestication started earlier -- at least 3,400 years ago.