All the president’s stuff 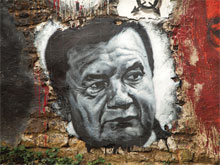 The National Art Museum of Ukraine has opened an exhibition of objects from the compound of ousted President Viktor F Yanukovych, who was driven out in late February following a mass uprising.

Aleksandr Roytburd, a painter, chuckled as he scrutinised a portrait of Yanukovych, made of poppy seeds and beans. “It looks like a joke from the Stalinist time,” Royburd who organised the exhibition said. “A gift for Comrade Stalin.” There is also a portrait taken from the home of Ukraine’s former state prosecutor that shows his blond wife dressed like a member of the ancient regime French aristocracy—a triumph of post-Soviet, crony-capitalist kitsch. Surveying the array of objects, from the elegant to the grotesque, “it was clear that Yanukovych couldn’t identify which things were valuable and which weren’t.” The exhibition is “an attempt at criticism through ironic analysis”, he said.