All the way to Brazil to find Vidarbha cotton solution

In April this year, a high-level team of agriculture officials and the director of the Central Institute for Cotton Research (CICR) at Nagpur went all the way to Brazil to learn how the South American country manages to have the highest cotton yields in the world—without using high-tech genetically modified seeds, without hybrids and without irrigation. It uses straight varieties of high quality as India did in the past.

The team included a joint secretary from Krishi Bhavan in Delhi, headquarters of the agriculture ministry, Maharashtra’s agriculture commissioner and principal secretary, agriculture, of Andhra Pradesh among others.  They came back enlightened. Rainfed Vidarbha with hardly any irrigation facilities in its harsh terrain needed not Bt cotton and expensive inputs but the traditional Desi cotton and high density planting system (HDPS).

Thus, came about CICR’s initiative in 65 ha of Vidarbha to grow its traditional cotton with HDPS, a pilot that has the blessings of the Central and state governments. Cost: Rs 10 lakh for the project spread across eight of Vidarbha’s 11 districts (see detailed story: 'Desi cotton to the rescue' in DTE issue of July 1-15, 2012). 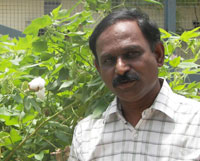 There is a sudden urgency to implement the HDPS Desi cotton project which will later be extended to rainfed areas of Madhya Pradesh, Andhra Pradesh and Orissa. CICR director Keshav Kranthi said in an interview to DTE: “As of now there is no financial allocation in the form of a formal project. But we couldn't afford to wait for any of the project approvals, and started off. We have not as yet provided any inputs to farmers except seeds.”

He also points out that although farmers have been given no assurance on anything else, “they do not seem to be bothered because of the low fixed cost of inputs.” The package of inputs and practices works out to Rs 4,525 per acre (0.4 ha) for HDPS with superior varieties and Rs 3,195 for Desi varieties as against Rs 10,000 for Bt cotton.

Brazil uses HDPS in which cotton plants are packed tightly together at 8-10 times the normal rate and planted in rows. It also uses growth regulators. It has the highest productivity among the top six cotton growers in the world with yields of 2,027 kg/hectare that are much higher than the world average of 725 kg/hectare. India’s yields are less than 500 kg although 97 percent of the cotton area (around 11 million hectares) is under transgenic Bt cotton, most of it global seed giant Monsanto’s Bollgard seeds.

But far from increasing yields and cutting down pesticide use as the company had promised when Bt cotton was introduced in India in 2002, yields have been slipping. According to Kranthi, pesticide use has been increasing (see 'Cotton saga unravels'). In Vidarbha, GM cotton has proved to be a grim experience for farmers as erratic rains and high costs of cultivation have resulted in poor returns. This appears to be a prime cause of the wave of farmer suicides that have touched nearly 9,000 since 2005, according Kishore Tiwari who heads the Vidarbha Jan Andolan Samiti, an organization fighting for farmer’s livelihoods.

But the question that some agriculture scientists and farmers’ leaders are asking is this: did officials have to travel half-way across the globe to Brazil to rediscover suitable methods of cultivating cotton in Vidarbha which has all along followed the so-called 'Brazilian model'? Vijay Jawandhia, farmer leader from Wardha, says he is surprised by the ballyhoo over the Brazilian model. “Before the advent of hybrid cotton, farmers in Vidarbha were practicing HDPS. I remember in 1974 when I started growing cotton we used 5 kg seed per acre and planted it in rows. Then everything changed after hybrids came into the market. Why was this practice killed? CICR must first explain why it allowed hybrids to be cultivated in Vidarbha.”

Jawandhia is a founder member of the Shetkari Sanghatana, which he has since left because of policy differences. He is of the opinion that the CICR project to bring back desi cotton and straight varieties would make sense only if there is a clear policy on cotton. “We cannot support such a haphazard policy.”

It’s a valid concern given that most of the country is under Bt cotton hybrids unlike in China which has used its traditional varieties to bring GM cotton for the farmer. “First we got Bollgard and then Bollgard II and now they are getting ready with Roundup Ready. The cotton farmer remains enslaved by seed companies,” says Jawandhia.

He contends that unless Bt cotton is removed from Maharashtra the  desi cotton experiment will not succeed. “We need to know what will be the effect of the 97 percent Bt cotton on traditional varieties,” he says. “Will the Desi cotton act as refugia (buffer zones) for the GM cotton and attract all the pests?” Jawandhia, for his part, has switched to soybean from cotton cultivation on his 12 ha farm at Waifad in Wardha district of Vidarbha because of falling yields.

There are others like agriculture scientist G V Ramanjaneyulu who worry about the future of straight varieties in view of the overwhelming presence of GM cotton. “The CICR initiative is a welcome move.  But CICR should answer the question about contamination of Bt Bikaneri Narma and the way they withdrew it.  if Bikaneri Narma was contaminated, any other variety could also be contaminated. What is the use of promoting traditional cottons? These will also get contaminated.”

Bikaneri Narma was the GM cotton developed by the Indian Council of Agricultural Research (ICAR) but was withdrawn within a season of its release  because it was found to be “contaminated” by Monsanto’s MON 531 Bt cotton which is the gene construct of the Bollgard Bt cotton sold in India.

Ramanjaneyulu, who left ICAR to set up the Centre for Sustainable Agriculture in Hyderabad, also points out that the authorities are merely repackaging Vidarbha’s traditional practices. “Cotton density earlier was the same. Now they are going back to the old method and calling it the Brazilian model.  In the name of modernization, the authorities increased the spacing between cotton rows but we are going back to the traditional system.”

Officials are not conceding this. Maharashtra agriculture commissioner Umakant Dangat and Kranthi believe the Brazilian model will enable first, Vidarbha to catch up with rest of Maharashtra in cotton yields and then Maharashtra to reach the all-India average.

But with Indian yields having shown little improvement in the past five years, CICR is betting on GM varieties to transform the picture. Work is under way to develop compact multi-gene ‘super Bt cotton’ dwarf varieties that are expected to be commercialized by 2016.  These will also be used with HDPS system.

The cost of developing this is expected to be Rs 100 crore.