All you need is an eye 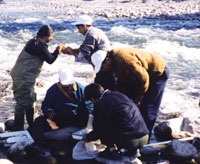 GAUGING a river’s health need not be complex. Taxonomists can make the job very simple. These biologists, who have specialised in the classification of organisms, can determine a river’s health with the unaided eye by simply studying the organisms present. There is little need, therefore, for bottling samples and rushing them to laboratories to place them in low-temperature incubators.

In the upper reaches of the Teesta in Sikkim, for instance, scientists found caddis fly (Trichoptera) larvae on the riverbed. “This is a pollution sensitive species whose presence tells us that we can drink directly from the stream,” said Pratima Akolkar, scientist of the Central Pollution Control Board (CPCB).

Not all organisms are useful in determining water quality. Plankton give an indication of quality at the topmost ecological layer of a waterbody only. Drawing inferences from fish is tricky since they keep moving.

Bio-monitoring programmes, therefore, track macro-invertebrates, organisms without a backbone, found in the lowest ecological zone in a body of water. Such organisms are static and respond to changes in water quality. They are also visible to the unaided eye. But despite the inherent advantages of such techniques, a bio-monitoring protocol is not mandatory in India.

As per a July 25 study in Current Science, existing biotic indices do not take into account the abundance of the taxa. The researchers from University of Delhi detailed a novel methodology, called the macro-invertebrate water quality index (MWQI). 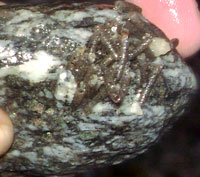 The index draws inferences on river health from the fact that some species survive or even thrive in dirty waters while others are pollution intolerant. The authors argue MWQI is better than other invertebrate-based indices mostly based on the presence or absence of a particular taxon. They do not reflect decline in population. The presence of a single individual of a taxon in a sample versus 100 individuals of the same taxon in another sample indicates different water quality. “Our index takes into account the biotic richness,” said Jay Bhatt, lead author of the paper.

The only concern is when species have not been assigned a pollution sensitivity score. But such instances in the case of endemic species are rare, said Maharaj Pandit, professor at the school of environmental studies, Delhi University and co-author of the paper. It is likely that the water quality is good if you find more endemic species. “A pollution sensitive species is unlikely to have escaped attention and classification,” he said.

MWQI is indeed robust and influenced by the relative abundance of a species, said Akolkar. But it does not reflect the level of impairment in water quality for a particular use, such as drinking or bathing, she added.

CPCB, a statutory body with the mandate to monitor water quality in India, was constituted under the Water Act, 1974. The agency has a penchant for incubators and lab coats; physicochemical indicators take precedence over bio-monitoring.

CPCB began operation in 1978 with 50 stations. Over the past three decades the network grew to more than 1,700 stations, 70 per cent of which monitor rivers. The Water Act provides for maintaining or restoring the wholesomeness of water. “Wholesomeness is undefined and physico-chemical parameters alone cannot give the actual health of rivers,” said Akolkar.

Following a five-year collaboration with Dutch and German scientists, CPCB created a databank in 1994 and classified species endemic to Indian rivers. Each of them was assigned a score indicating sensitivity to pollution. This database has been used to biomonitor rivers in the Northeast; most of the rivers in these states are relatively pollution free. It was important to gather the baseline data to gauge future pollution.

Arunachal Pradesh, for instance, does not have adequate facilities to monitor physico-chemical parameters. CPCB funded a two-year project with the state board that ended in 2006. Since permanent employees had not participated in the project there is now no one in the state to bio-monitor rivers.

The situation is much the same at the Centre. Akolkar is the only official in CPCB’s biological laboratory who was part of the five-year protocol building exercise in the 1990s. She trained thousands of research fellows in the Central and state pollution control boards, a majority of whom have now left. Only Meghalaya and Karnataka have preserved their expertise and are in a position to train other state officials.

Akolkar can train someone in one hour to report on the quality of the Yamuna as it passes through Delhi. “But to ascertain the high diversity in the upper reaches of Himalayan rivers would require seven days of intense training,” she said.

Most rivers in the plains are no more than open sewers. “Biotic indices under these circumstances are of no value,” said David Johnstone, wastewater treatment specialist with Oxford University in the UK. Rivers of reasonably good quality or even recovering polluted rivers, biotic indices would be useful, he added. Biomonitoring sub-stratum collection may take one to two hours but can provide with an immediate impression of a waterbody.

A grab sample for a physico-chemical parameter, for instance, is easy to collect. The biochemical oxygen demand test, a key indicator of organic pollution, takes five days to yield results. But despite criticism, there is a wealth of knowledge based on it. It is the only measure of readily biodegradable carbonaceous material, said Johnstone. Of course, sampling procedures and analytical techniques are critical to good measurement and, to be honest, from an analytical perspective it’s a bit of a pain having to wait five days, but this should not detract from its usefulness, he added.

R C Trivedi, erstwhile deputy director of CPCB concurs. While biomonitoring is essential for a cumulative assessment, for restoration it is essential to understand the nature and magnitude of the toxicant, he said. To have a reasonable assessment of river quality a full suit would be best, but it would be expensive and depend on the importance of the river. Both monitoring protocols are complementary, said Akolkar.

CPCB has guidelines for monitoring laboratories. Standard facilities can measure 73 to 177 parameters relating to air and water at a cost of Rs 0.46 to Rs 6.45 crore per facility. There is no standardised cost for biological monitoring since the protocol has not been notified.