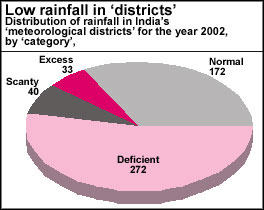 • If the 'seasonal rainfall' (June-September) of the entire country is 'within 10 per cent' of the 'long term average', it is called 'normal' rainfall

• This year, 'seasonal rainfall' for the entire country was '19 per cent' 'below' the 'long term average'


• The country as a whole may 'get' a 'normal monsoon' , but different 'meteorological districts' and 'sub-divisions' can 'get' 'rainfall' 'below normal' . The 'rainfall categories' for smaller areas are defined as: 'deviation from a meteorological area's normal rainfall'

(i) Meteorological drought: 'Actual rainfall' in an area significantly less than 'climatological mean' of that area

• Rainfall in July (most important for agriculture) was 49 per cent 'deficient'. The last time this figure fell below 45 per cent was in 1911

• When there is more than 10 per cent rainfall deficiency, and more than 20 per cent of the area is under drought, the situation is called "all-India drought"