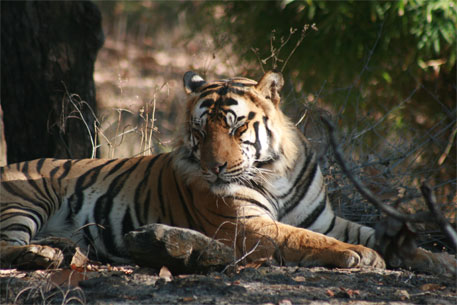 A senior minister in the Madhya Pradesh government has made a bizarre suggestion for increasing the number of big cats in the country. She wants the state government to allow people to keep tigers and lions as pets.

“Keeping tigers as pets is legally allowed in southeast Asian countries like Thailand and some other countries. The number of these animals is surprisingly high there,” wrote Mahdele in her letter to the government.

Crores of rupees are spent on several projects for conservation of tigers and lions in the country. But their numbers have not registered a miraculous increase, she said. She asked the forest minister to instruct the concerned authorities to explore the possibility of domesticating these animals on the lines of the examples cited by her.

After receiving the suggestion, the chief wildlife warden of the state wrote to the member secretary of the National Tiger Conservation Authority and the director of the Wildlife Institute of India, asking them to give their suggestions and views on the minister’s request.

The minister’s letter was recently accessed by Bhopal-based RTI activist, Ajay Dubey. “This is not expected of the law minister of the state who is also one of the senior most ministers in the government. How can she go beyond the country’s wildlife laws which do not allow captivity of wild animals? Besides, there is a global campaign going on against the captivity of tigers in countries like Thailand,” said Dubey.

Mahdele’s constituency is home to Panna, a major tiger reserve notorious for seeing a wipeout of all its tigers by poachers in 2009. “We have been demanding a CBI enquiry into the disappearance of tigers from Panna since 2009, but no accountability has been fixed yet. The law minister should have first looked into that instead of drawing lessons from Thailand,” added Dubey.

Mahdele’s suggestion caused uproar among wildlife activists and the media. But she defended her stand. "What is wrong if somebody who has enough land to keep a tiger is willing to take care of the big cat? Affluent people with farmlands of 20-40 hectares can accommodate a tiger. They can share the burden of the government and help increase the tiger population," she said. When told that keeping wild animals in captivity was against their natural behaviour, Mahdele said that they could be kept in the farms initially. Once their numbers improve and they grow into adults, they could be handed over to the forest department. She also argued that if humans have started caring for tigers, "tigers may also change their behaviour towards humans."