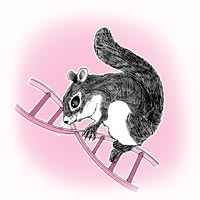 for the first time, researchers have discovered that a mammal has changed its genetic make-up to cope with global warming. The change has been observed in North American red squirrel.

Andrew McAdam and his colleagues from the University of Alberta, Canada, monitored four generations of the squirrels in Yukon, Canada, over 10 years. They found that female squirrels give birth 18 days earlier in a year than their great-grandmothers.

They then used a statistical technique to separate changes resulting from an individual's behavioural response from those pertaining to genetic alterations. The technique is called quantitative genetics, which has long been used in agriculture. It attributes about 15 per cent of the observed shift in the squirrels to genetic factors. "Because climate change is happening so fast, the perceived wisdom is that mammals won't be able to undergo evolution to keep pace with that. But this work offers a little glimmer of hope, at least for some species," says Lesley Hughes, who studies affects of climate change on species at the Macquarie University, Australia.

Another surprising aspect of the find is how quickly the squirrels have changed. A detectable response was seen within three generations. Usually it takes tens to hundreds of generations for such affects to become noticeable.

Presently it is almost impossible to predict what the squirrels' 'adaptation threshold' might be. Researchers now intend to analyse their genome to identify the genes that are responsible for the changes.