Amazon is a desert

...when you look for soil microbe 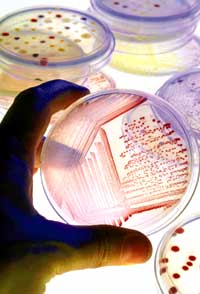 biodiversity-rich Amazon is more like a desert when it comes to soil microbes, while an arid desert is a teeming microbial Amazon, two us researchers have found.

Noah Fierer and Robert Jackson of Duke University studied the diversity of soil bacteria in 98 locations in South and North America and found that the acidic soils of Amazon rain forests harbour fewer bacterial species than the neutral soils of deserts. "Qualitatively, there was no clear relationship between soil bacterial diversity and plant diversity at the continental scale," they said in a paper that appeared in the early online edition of the Proceedings of the National Academy of Sciences on January 9, 2006.

While temperature and latitude of an area largely determine its plant and animal diversity, this cannot be said to be true of soil bacteria, the scientists said. Their studies revealed that the primary factor governing the diversity of soil bacteria is soil p h, which is a measure of acidity/alkalinity. The p h scale ranges from 0 (very acidic) to 14 (very alkaline or basic). A p h value of 7 indicates the neutral state.

"Although soil bacteria have been studied for centuries, fundamental questions (about their existence and diversity) remain unanswered," said Fierer. "We probably know more about the organisms in the deepest ocean trenches than we know about the organisms living in soil in our backyards. We step on soil every day, but few people realise that 'dirt' supports a complex community of microorganisms that plays a critical role on Earth," he added.

Soil microbes belong to two main categories -- bacteria and fungi. The diversity of fungi is known to a large extent, thanks to several earlier studies. But very few extensive scientific studies have been carried out on soil bacteria. "Given their importance, it was really surprising that no one had tried to systematically explore the pattern of diversity of soil bacteria on a continent-wide scale. Part of the reason is such a survey is technologically challenging, and it's logistically challenging as well," Jackson said. Soil microbes are crucial for the cycles that make nutrients available to plants and animals; and for much of the respiration that returns carbon back to the atmosphere as carbon dioxide. They also give off most of the important trace gases, such as methane, found in the atmosphere. It is estimated that a gramme of arable soil has 100 million microbes belonging to 10,000 species.

According to J C Tarafdar, a soil microbiologist with Jodhpur-based Central Arid Zone Research Institute, it is known that the diversity of soil bacteria is higher in neutral soil condition, while fungi are dominant under acidic conditions. The soil in tropical forests remains acidic because of large-scale decay of organic matter such as fallen leaves and trees.

The us researchers assessed the microbial diversity of their samples by performing " dna fingerprinting" that would reveal the diversity of a particular kind of dna called ribosomal dna. This dna varies considerably among bacterial species, and so can be used as a type of genetic "bar code" to differentiate species. While the technique did not tell the researchers how many microbial species existed in each sample, it did give them a comparative measure of their diversity, said Jackson. The analyses revealed large differences among the samples in terms of diversity. The scientists then correlated that diversity with environmental factors, including latitude, temperature and soil p h.

"As biologists and ecologists, the factors that we think of typically as controlling plant and animal diversity didn't seem to correlate with the diversity of microbes," said Jackson. "Instead, the factor that correlated best with diversity was the p h of the soil they were growing in. It does make sense, since every biologist knows that when you culture microorganisms in the laboratory, the diversity and the health of those organisms tend to decrease in more extreme p hs." However, Jackson did not rule out the possibility of microbial "hot spots" that their broad survey might have missed.

The study also suggests that soils with similar levels of acidity, even if thousands of kilometres apart, have similar bacterial communities. According to the scientists, this was a first step to a better understanding of what controls microbial diversity around the world. Such understanding will offer important insights into the many processes soil microorganisms control -- including the carbon cycle of decomposition of organic matter and the nitrogen-fixing cycle -- both of which free nutrients for plants. Microbes also control emissions of methane and other gases, many of which are important greenhouse gases.