Amazon not for sale, says Brazil 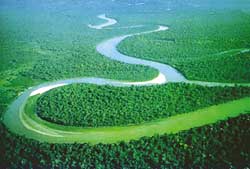 BRAZIL recently declared its opposition to a British proposal for a global trust to buy and preserve land in the endangered Amazon rainforests. It has instead asked Al Gore, the former us vice-president and a prominent advocate of climate change, to support its rainforest-protection plan.

In a media statement, the environment minister of Brazil, Marina Silva, said the Amazon was "not for sale" and the country had its own plan for the conservation of the Amazon rainforests, which will be tabled at the annual un climate convention conference in Nairobi in November 2006. The announcement was in reaction to a recent British media report saying that the uk environment secretary David Miliband would soon make proposals to establish a global trust to buy trees in the Amazon and control forest activities to limit deforestation.The Brazilian government says it wants foreign help to preserve the Amazon but rejected any sell off of what it described as the heritage of people.

Meanwhile, the Rainforest Alliance has granted Forest Stewardship Council (fsc) certification to a 1.5 million-hectare rainforest in central Amazon, which is owned and managed by Brazil's Kayapandoacute indigenous people. Rainforest Alliance is an international organisation that pioneered the world's first sustainable forestry certification and aims to protect ecosystems. The tropical forest area is the largest in the world to receive fsc certification and is the largest forest managed by indigenous people in the fsc system. The certification now makes Brazil the leading Latin American country with the most fsc- certified forestlands, spread over five million hectares.