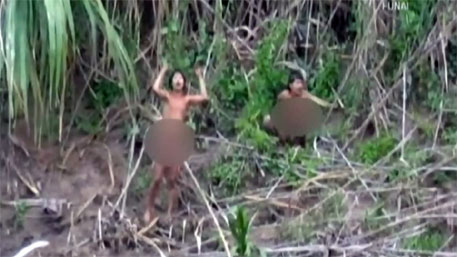 Native people of the Amazon who lived in an isolated area in Peru for hundreds or thousands of years recently made their first ever contact with the outside world. According to news reports, they travelled over the border into Brazil during their journey to meet the outside world.

Pictures and video released by Brazil's indigenous authority Funai show the small group carrying bows and arrows walking along the banks of the Envira River, near the Peruvian border. Experts said the indigenous people probably crossed the border from Peru because of increasing pressure from illegal logging and drug trafficking in their home area. The encounter was made at the Envira River, located at the border between Peru and Brazil.

Reports also suggest that Funai, the Indian affairs agency for the Brazilian government, offered assistance to the travelers. The agency was first alerted to the presence of the uncontacted people when another tribe, known to the organisation, reported the theft of metal tools from their encampment.

While the world is busy viewing the picture and videos of the tribes’ first contact with outside world, health officials are worried that at least some members of the group may have contracted influenza during their encounter.

A video of the first encounter, including the song of the native people, is available on the Funai YouTube channel.

Rights group Survival International, in a report published in sky.com said the episode was extremely worrying, since influenza epidemics have wiped out entire tribes in the past.