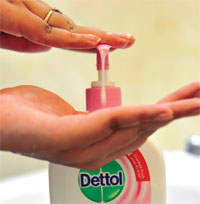 HANDWASH brands like Lifebuoy and Dettol promise to make you 99 per cent germ-free. The promise rides on the properties of an antibacterial agent triclosan, which has been in use for over 40 years. However, it is only in the past decade that this common active ingredient is under scrutiny for being detrimental to health. A new study has added to the evidence. It has found that the chemical can weaken muscle contraction in animals.

To assess the effect of triclosan, researchers from University of California, Davis, US, exposed mice and fish to various doses of the chemical. In mice, this resulted in impairment of both voluntary and involuntary muscles. In fact, cardiac output was reduced by 25 per cent in mice treated with the highest dose of triclosan, 25 mg/kg . The chemical had serious effects on skeletal muscles, too, and reduced grip strength of mice by 18 per cent.

The larvae of the fish, fathead minnow, that were kept in triclosan-tainted water for seven days had reduced swimming ability, endurance and ability to avoid the predator at the highest concentration of 0.52 micrometre of triclosan. “Structurally, triclosan is related to organic pollutants like polychlorinated biphenyls, commonly found in toys and known neurotoxins that we have been interested in for over 15 years,” explains Isaac Pessah, lead researcher. These are known to alter functioning of Ryanodine receptors (Ryrs) that regulate the flow of calcium ions within the cell, he adds.

He explains that all cells store calcium ions. These are essential for muscle contraction as they physically bind with the thin filaments of muscle. To initiate contraction, calcium ions are released from their specialised compartments, like sarcoplasmic reticulum found in the muscles, via the Ryrs channels. Exposure to triclosan results in lower release of the ions and, thus, slower contraction. Prolonged exposure can even lead to complete inhibition of calcium ion flow. The findings were confirmed in lab, using cell cultures. The study was published online in PNAS on August 13.

Not an isolated case

Earlier studies had shown the ill effects of triclosan on the function of hormones. For example, a study by University of Victoria in Canada in 2006 found that triclosan exposure decreased thyroid hormone levels in the bull frog. Two studies by the US Environmental Protection Agency in 2009 and 2010 showed that the chemical altered sex hormone production and suppressed the thyroid hormone in rats. However, this was not considered enough to ban triclosan. Experts argued that direct parallels between the physiology and hormonal function of rodents and humans cannot be drawn as they have significant differences. “But calcium ion flow is a fundamental mechanism by which muscles regulate contraction in all species. So what we find in mice should be relevant to humans,” says Pessah.

Soap companies are not moved by scientific evidence. They await government regulation. “Unilever uses triclosan in a limited number of products. These products provide real-benefits to consumers and we are in line with regulatory limits worldwide,” says a spokesperson of Hindustan Unilever, maker of Lifebuoy handwash. “We will continue to monitor and review the situation for triclosan,” he adds.

But government agencies abroad, like the United States Food and Drug Administration (US FDA), are concerned. An expert panel convened by it in 2005 had found that triclosan does not provide any benefit to the average consumer. The agency is soon expected to finalise a directive on the use of triclosan. “Studies have demonstrated that the consumer does not benefit from the use of antimicrobial soap over regular soap. The new research adds to the extensive literature on potential human health risks and documented environmental pollution from triclosan,” says Rolf Halden from Center for Environmental Biotechnology at the Arizona State University who was part of the committee. “It is time to curtail triclosan use to clinical and hospital uses, where its application can be reasonably justified,” he adds.