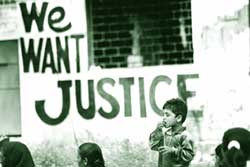 As the 20th anniversary of the Bhopal pesticide plant tragedy sounded its sombre bell this week, media organisations and charities worldwide breathed new life into campaigns to bring justice to all those affected. In December 1984 eight thousand people were killed and half a million maimed when a 27 ton cocktail of lethal toxic gases leaked from the dilapidated Union Carbide plant into the teeming heart of Bhopal's old city. Over the last twenty years a further 15,000 people have died through exposure to the toxins, and many others suffer from debilitating diseases for which treatment is largely ineffective. Twenty years on, survivors are still waiting for adequate compensation, medical assistance and treatment, and comprehensive economic and social rehabilitation. Furthermore, the site has not yet been properly cleaned up, so toxic waste continues to pollute the local area and contaminate the water supplies of 20,000 people.

Across the world diverse media forms have been employed to bring awareness of the chemical massacre and justice for its victims. In Germany, Sabine Breitsameter aired his radio play Bhopal-Erinnerungen an die Giftgas- Katastrophe von 1984, which incorporates original sounds and voices from Bhopal. Amnesty International launched a massive campaign urging the Indian government and Dow Chemical to clean up the site, and calling for the imposition of an international framework of human rights for business based on the un Norms for Business to hold companies accountable and guarantee redress for victims. Meanwhile students across the world organised events and campaigns demanding that Dow Chemical finally resolve its legal and moral responsibilities for the 'Hiroshima of the chemical industry'. The events, organized by Students for Bhopal, Association for India's Development chapters, the Campus Greens and the Environmental Justice Program of the Sierra Student Coalition, represent the first mass student movement Dow has faced since its production of killer chemicals Agent Orange and Napalm during the Vietnam War.