An aspirin a day keeps cancer away 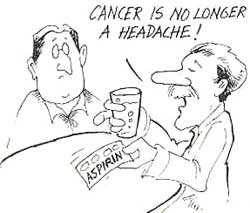 ASPIRIN -- the world's most popular pain-killer -- if consumed regularly, may reduce the risk of cancer of the digestive system, suggests a study undertaken by Michael J Thun and his team from the American Cancer Society and the Emory University School of Public Health in Atlanta. They found a decreasing risk pattern in cancers of the oesophagus, stomach, colon and rectum with more frequent aspirin use among both sexes. No lowering of risk, however, was observed in cancers of the pancreas, liver and gall bladder (Cancer Research, Vol 53, No 5). Persons who used aspirin 16 times a month or more for at least one year were 40 per cent less likely to develop cancer than those who used no aspirin, the study found. Researchers examined more than 600,000 volunteers who filled a questionnaire on such topics as medication use, smoking history, diet, alcohol intake, physical activity, current illnesses and family history of cancer.

The researchers, however, caution that the results of the study must be interpreted with care. Some aspirin consumers, they explain, might develop bleeding or receive closer medical scrutiny, leading to earlier diagnosis of polyps or tumours at a stage that improves survival. This hypothesis, if true, could mean that the benefits of aspirin might arise indirectly from its side-effects rather than through chemoprevention. Such a bias might put a question mark on the study regarding colon or rectum cancer, contend the researchers, but it cannot explain the reduced risk of oesophagus or stomach cancer.