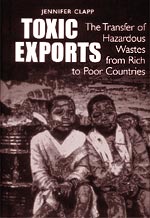 The year 1989: the Khian Sea ship sets sail from the us loaded with nearly 14,000 tonnes of toxic flyash from Philadelphia's municipal waste incinerator. Its aim: to dispose of hazardous waste somewhere outside us territories. It first stops at Bahamas and then makes a round of the Caribbean Sea in search of a port that would accept its burden. The search goes on for months; finally the waste finds acceptance in Haiti under the guise of fertiliser. But the Haiti government smells the mischief soon and orders the waste to be removed. Khian Sea sets sail again, but not without leaving behind huge amounts of flyash on the Haiti beach. It tries off-loading in Africa, Europe, the Middle East, and East Asia, without luck. After 27 months, the ash mysteriously disappears from the ship somewhere in Southeast Asia. This incident sets the tone for Jennifer Clapp's Toxic Exports: The transfer of hazardous wastes from rich to poor countries, an in-depth analysis of international trade in hazardous waste from industrialised countries to the developing ones.

Moreover, efforts to control trade in hazardous waste has lead many transnational corporations to shift polluting industries from industrialised countries to the poor developing nations: a typical nimby (Not in my backyard) attitude. The reason: environmental regulations in industrialised countries. Linked to this are the "push" and the "pull" factors. The former in this case implies stringent regulations in industrialised countries. For example, in the us landfill costs for dumping hazardous waste rose from us $15 per tonne in 1980 to the us $250 tonne in 1988. On the contrary, the pull factor suggests that the poorest and weakest countries -- burdened with international debts -- are desperate for foreign exchange and are often receptive to any proposal that enables them to earn hard currency. So, Africa and other less industrialised countries became favourite targets for waste traders in the mid-1980s. The government of Guinea-Bissau was offered four times the value of its gross national product (equal to twice the value of its external debt) if it would accept up to 15 million tonnes of toxic waste over 15 years. In 1991, in the midst of famine and war, Somalia received a lucrative proposal in return for off-loadng a waste shipment. It is also a common practice for industrialised country governments to send banned chemicals/pesticides as part of the tied-aid packages.

Of course sometimes the industrialised countries show a bit of generosity. They offer clean up technologies. It is an altogether different matter that such technologies are merely end-of-the-pipe treatment solutions and fail to address the larger problem of hazardous waste.

Moreover, the definition of hazardous waste is shrouded in enormous confusion: it differs from country to country. "Environmentally sound management" is also open to subjective interpretation. The prior information consent procedure of the Basel Convention is meaningless, as the letter of consent does not have to be sent to the convention secretariat for inspection. The convention lacks provision for liability and compensation for toxic waste contamination. Another important issue at hand to reconcile the exchange of hazardous wastes with the principle of free trade and the World Trade Organisation.

The only solution to all these problems, according to Clapp, is to shift to cleaner production technologies.