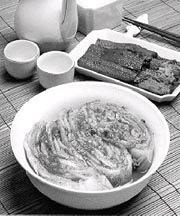 it is a war over the palate. And it threatens to arouse the ill-concealed rancour between South Korea and Japan. The bone of contention is 'kimchi' - South Korea's national dish. A hot blend of garlic, spices and fermented vegetables, kimchi was a speciality exclusive to South Koreans until 1988, when several Japanese returned home from the Seoul Olympics with a new-found liking for the dish.

Today, kimchi is also prepared in Japan, although they spell it as 'kimuchi', keeping the pronunciation the same. And the recipe is also different. However, irrespective of the differences, both nations would have been content to savour their own recipes had it not been for the mushrooming trade in kimchi. And the fact that Japan exports more kimchi than South Korea. For instance, in 1998, South Korea exported us $200 million worth of kimchi. Japan exported four times as much.

To settle the issue, South Korea is trying to get the original kimchi recipe adopted by the Codex Alimentarius Commission, a subsidiary body of the Food and Agriculture Organisation ( fao ) and the World Health Organisation ( who ). Once that happens, Japan will have to call its version of the kimchi by some other name.

But Tokyo is putting up a stiff fight. Although it failed to get Codex to accept the name 'kimuchi', it has made a significant move in another direction: getting the Japanese recipe for kimchi on the Codex draft to be ratified in an international meeting in July next year. This is significant in the light of the fact that the Japanese preparation of kimchi is different from the South Korean recipe.

For one thing, the Japanese do not ferment the vegetables, and they use citric acid and gum instead of the traditional salted seafood. But this makes it more palatable to the Japanese taste than the Korean preparation, which is high in lactic acid and, therefore, very sour and extremely spicy. According to kimchi afficionados - 99 per cent of whom originate from South Korea - the Japanese kimchi is a pale imitation of the real thing. Unfortunately for the Koreans, the comparatively mild-flavoured Japanese kimchi is also a favourite among most overseas buyers.

Moreover, Koreans are also troubled by the stance adopted by Japan since for them kimchi is more than just a delicacy. Employees in South Korea often enjoy "kimchi holidays" and "kimchi bonuses" and most homes have a refrigerator just for kimchi. The media in Japan too are sympathetic to the South Korean cause. Recently the magazine Asahi Geino pointed out that kimchi is more than just food to South Koreans, it is a part of what makes them a nation.