The recent discovery of 800,000-year-old fossils may provide an insight into the last common ancestor of modern humans and Neanderthals 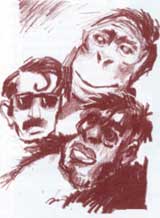 THE last common ancestor of modern humans and their extinct cousins, the Neanderthals, may have been found. The claim was made by Spanish palaeontologists after they found 800,000-year-old fossils, in May, in an ancient lime- stone cave in Spain, which they say represent an entirely new species.

Other scientists are, however, sceptical about these claims. They agree that the fossils, whatever their species, are the remains of the earliest known Europeans. As such, the fossils are critical to the understanding of how Europe was first inhabited by hominids, the family of all human species. But the scientists have expressed serious reservations about assigning the Spanish fossils a separate limb on the family tree.

A team of palaeontologists, led by low M Bermudez of the National Museum of Natural Sciences and Juan Luis Arsuaga of the Complutense University, both in Madrid, made their case for a new hominid species after examining the bones of a boy with a remarkably modern face. The partial remains of the boy - about 10- 11 years old - and five other individuals, were discovered two years ago at the Gran Dolina cave in the Atapuerca hills near Burgos, Spain.

The boy's cranium, lower jaw and teeth, were seen by researchers as primitive. But between the brow and the jaw, the sunken cheeks, the projecting nose and other traits suggested "a completely modern pattern of midfacial topography", the palaeontologists wrote in a report in Science. This combination of modern and primitive characteristics seem to set the Atapuerca boy apart from any previously recognised species, they said. No hominid had been known so have developed such a modern face carber than 200,000 years ago. And the primitive aspects do not seem to be like those of the Homo Heidelbergensis, the Heidelberg Man of 50-0,000 years ago, which is the earliest known hominid in western Europe.

A journal quoted Antonio Rosas, another palaeontologist from the Madrid museum and member of the team, as saying that the boy's facial traits are "exactly the morphology we would imagine in the common ancestor of modern humans and Neander- thals". According to the Spanish researchers, one way to account for the Homo antecessor's role as the ancestor to both Neanderthals and modern humans, is to postulate the origin of the new species in Africa, although no similar fossils have been found there. Some members of the Homo antecessor in Africa gave rise eventually to Homo sapiens, according to the hypothesis, while others migrated to Europe, possibly about a million years ago. The European branch then evolved into Homo Heidelbergensis, which in turn evolved into Neanderthals.

But many palaeontologists are not yet prepared to accept the Homo antecessor as a distinct species. "I am reluctant to endorse this new species," said Philip Rightmire, a palaeontologist at the State University of New York at Binghamton. "I wonder if the facial characteristics of one juvenile are really diagnostic. It's tricky to compare children to adults and on that basis, establish a new species."

Fred H Smith, a palaeontologist at Northern Illinois University in DeKalb, who specialises in European hominids, said that the Gran Dolina fossils were "interesting and important", but were "insufficient evidence for a new species". Smith said that the fossils would probably turn out to be either an early Homo Heidelbergensis or late Homo erectus.

Rosas said that the few pieces of facial bones from some adults collected in the Dolina cave - a discovery that was announced in 1995 - also showed characteristics similar to the features found in the boy's face. He insisted that the team had enough evidence to support the designation of a new species, although "people are probably going to need some time to accommodate this proposal".