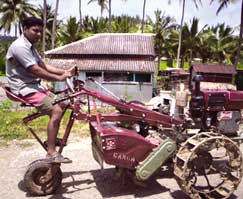 Providing relief after a disaster like the December 2004 tsunami is a great challenge, especially in archipelagos far away from the mainland. But the administration of the Union territory of the Andaman and Nicobar Islands has just shown how to make effective relief even more difficult. Two items -- power tillers and neem cakes, distributed to improve farming -- are at the centre of a controversy that questions the administration's decisions.

Several consignments of neem cake lie unattended, rotting and providing a breeding ground to flies, menacing public health. "There is a rise in cases of diarrhoea in Car Nicobar because of increase in the number of flies due to neem cakes. The situation may become worse if nothing is done," said H Charles, medical superintendent of a government hospital in Car Nicobar. "We have never seen so many flies."

As for the power tillers, several 'beneficiaries' have no use for these machines costing about Rs 1 lakh each."The agricultural relief package surprised us. Most of our people don't know how to use power tillers," said Martin Luther, a tribal leader and coordinator of tribal council of Car Nicobar.

The Light of the Andamans, a weekly newspaper in Port Blair, has been carrying stories on the flaws in the distribution of power tillers and the rotting dumps of neem cake regularly. The administration of the islands has issued a press release, saying these allegations are unfounded. It said the distribution of agricultural aid is based on the recommendations of committees appointed by the Union government.

While the manure and power tillers have helped farmers in the Andaman group of islands, their utility in the Nicobar group of islands is not too probable. Thomas Philip, captain (chief) of Mus village and secretary to the tribal council of Car Nicobar, explained: "Power tillers are useful only in paddy fields. But we hardly grow paddy. The tillers are good only for transport." Paul Yoora, chairperson of the tribal council of Great and Little Nicobar, wonders how the administration decided that tribal farmers needed power tillers: "How can we cultivate in the hills (like in the plains)?"

Some tillers were given to people who can't afford fuel to run them. To some, it has brought a different kind of relief. "Selling these tillers helps them in this time of distress," said Amit Kumar Roy, field worker for the ngo Healthy Environment by Less Pollution. Farmers who can afford the fuel won't get any. Most islands of Nicobar have only one fuel station. The farmers depend on local traders who sell fuel in jerrycans. "It seems these machines have been distributed to meet government targets, not to give what the farmers need. What a waste of critical development funds," said Roy.

The government does have its reasons. "Actually, we got requests for tractors. But those are very costly, especially, considering the number of machines needed. So we decided to buy power tillers," says Janak Digal, secretary of the agriculture department in the islands.The Union ministry of agriculture and the Central Agriculture Research Institute (cari) fully support the distribution of power tillers, arguing that they are specially designed for hilly tracts and are useful in small landholdings because they are hand-operated, light, and can turn in any direction. They claim the farmers are happy with the tillers and there is a ready demand for tillers.

cari says agriculture in the islands was primitive before the tsunami, and required heavy manual labour. So, while rebuilding, semi-mechanisation is being introduced to increase productivity. "Earlier, farmers used to take two to three months to crop their land. But now, they are able to do the same work in 15-20 days," said R C Srivastava, director of cari. N B Singh, agriculture commissioner at the Union ministry of agriculture, agreed: "The tillers are a step towards achieving the rehabilitation motto -- build it better."


"Power tillers are difficult and dangerous to use in these hilly tracts," said Rashid Yusuf, spokesperson for the tribal councils of Nicobar. "There have been unconfirmed reports of deaths due to accidents with tillers. The community's needs have not been assessed properly. In Car Nicobar, horticulture is the mainstay; tillers don't have much use," said Harjeet Singh of the ngo Action Aid. Manoranjan Bakhta, member of Parliament who represents the islands, told Down To Earth in New Delhi: "I don't know who ordered these tillers."

Whether the demand for tillers was there before the distribution started or has appeared since, is doubtful. What is undoubted is that the tillers have taken the administration's attention away from what's really needed. Yoora, for instance, said the farmers urgently need agricultural implements. Though the government provided these, they were of poor quality. "So farmers have had to buy their own implements," Yoora said.


With neem cake, it's not just about rotting stocks. The question is more basic: was it needed at all? In 2005, when the administration took out tenders for the neem cakes, Sameer Acharya of the ngo Society for Andaman and Nicobar Ecology, had protested. He wrote to the administration and the Planning Commission, questioning the procurement of manure from outside the islands because it could bring in weeds to the islands. The islanders could make the manure locally, he said, saving time and freight cost.

Portentously, Acharya had pointed out that the manure with 15 per cent moisture would not last long, given the humidity in the islands as well as the long time required for its transport and the poor state of roads and jetties after the tsunami. The moisture, he felt, was likely to increase the chances of pest infestation in the manure. He said the Planning Commission member agreed with his submissions. But then the government did exactly as he had opposed.

cari scientists said producing manure locally was not feasible after the tsunami. "Producing dung would take at least three months and even before that farmers will have to be trained. Besides, we lack the technology (no composting culture) and sufficient quantity of dung is not available," said R B Rai, former director of cari.

As Acharya had feared, the distribution of the 11,400 tonnes of neem cake bought by the administration became a mammoth problem. "I was at the port when the ships arrived," said Anwar Moosa, chief medical officer of Nancowry. "There was pressure from the shippers to unload quickly and there was a labour shortage. So the neem cake was dumped haphazardly."

Singh blames lack of storage space in the tsunami's aftermath. The agriculture department had invited tenders from contractors in Nicobar for carrying neem cake to the villages. Rashid Yusuf took up the distribution of the neem cake, with help from tribals, in the 39 villages of Central Nicobar in mid-March. Yusuf said: "I had little money, but I mobilised my relations and raised Rs 11,50,000, using the crop compensation and borrowings. The cake was carried to villages on boats, trucks and, sometimes, manually. Several bags got torn in transit." Yusuf is yet to get his payments as the new assistant commissioner suspended payments. "We stopped distribution in June in the Central Nicobar area after distributing half of what we had picked up. We need our payment, as scheduled, to finish the job," says Yusuf.

Only in some places was the neem cake covered. The rest, exposed to rain, started decomposing. "Once it begins to decay, you can't move it," said Moosa, adding that it was risky to handle decomposing stock as it was a harbour of infections. "Where was the need to purchase so much manure?" he asked. "I have told the administration we don't want any more neem cake," said Philip. Vishva Mohan, joint secretary-cum-project director with the agriculture department, said it would take one month to distribute all the cake.


"Flies were a menace in Kamorta island two months ago," said S C Tyagi, assistant commissioner of Nancowry islands. "So we cleared up all the neem cake from the island and sent it to the islands for which they were meant. There is no such menace now." cari, for its part, denied an increase in fly population. It also claimed that flies cannot breed on neem cake, which has pesticidal properties. Singh denied that flies are breeding in rotting neem cake. Down To Earth checked with entomologists. They said if the moisture content increases beyond a threshold, neem cake begins to decompose. The active pesticidal ingredients of neem also decompose, making it possible for insects to nest in it. Besides, they pointed out, neem is not active against all insects and pests.

With reportage from the Andaman and Nicobar Islands