Andaman's settlement plans in a row 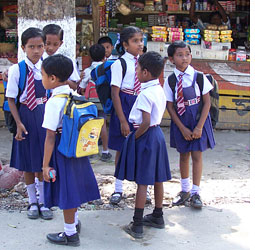 the Andaman and Nicobar administration has prepared a proposal to resettle people living on encroached public land since 1978. The plan, which awaits the Union Ministry of Environment and Forest's clearance, has already sparked off a row. Local ngos say it will encourage the encroachers.

Official estimates show that there are more than 35,000 encroachers in the island, mostly those released from the Cellular jail, refugees from Bangladesh and other migrants who settled on forestland in the islands. About 80 per cent of the islands fall under notified forest areas.

The new plan aims to give each family of the pre-'78 settlers about 540 sq m (0.054 ha). But there are problems. Many of the families are holding about 0.4 ha or more and they are not happy with the offer to move to a small piece of legal land. "A small piece of land won't fetch us anything," says Manik Moira of Wandoor village, 30 km from Port Blair.

Encroachments on forestland have been an issue in the islands for decades. After independence, the Union government approved settlement schemes for refugees people from Bangladesh and other migrants. "In 1987, the government issued a proclamation for regularizing the unauthorized occupation of land up to 1978. Under this, each family was given about one hectare of agriculture land and 200 sq m of homestead land in urban areas or 340 sq m in rural areas," K S Singh, the former deputy commissioner of south Andaman told Down To Earth in Port Blair.

The authorities hope this time too the plan will work since this requires about 2,000 ha of the total revenue land to resettle the encroachers.

Not many are buying this. "If the administration keeps giving such incentives, encroachment will never stop," says Samir Acharya of the ngo, Society for Andaman and Nicobar Ecology. He says welfare measures such as creating employment opportunity to encroachers will serve them better.

A few political parties too have come up against the plan. "What about the thousands of landless who never encroached on public land? asks K Ganeshan, spokesperson of the Andaman and Nicobar Territorial Congress Committee, adding that they should get priority in such schemes.