Andhra in a fix over quota

IT SEEMS elections for local bodies in Andhra Pradesh will not be held until contentions over reservation quotas are resolved. A day after the State Election Commission (SEC) announced holding panchayat polls by the second week of July, a division bench of Andhra Pradesh High Court stayed the elections. It also suspended a government order issued on June 6 to maintain the status quo of 60.5 per cent reservation for backward communities during panchayat polls this year. 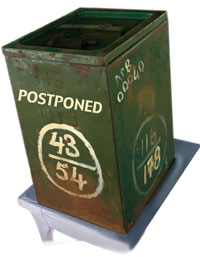 The court ruling came on June 15 in response to a public interest petition filed by one M Venkata Reddy from Nakulappalli village in Mahabubnagar district. The case was moved as an urgent lunch motion. Reddy had challenged the constitutional validity of the government order. He contended that reservation for backward communities—Other Backward Classes (OBCs), Scheduled Castes and Tribes (SC/STs)—cannot exceed 50 per cent as per a Supreme Court directive in May 2010. The bench ruled that the government order violates the Supreme Court directive.

SEC announced the polls on June 14 immediately after a single judge bench of the court gave the green signal for the elections. The bench was hearing a plea of the Andhra Pradesh Sarpanch Association to halt the polls until the government settled the reservation issue. The judge refused to interfere with the election process at this juncture.

The court rulings come at a time when terms of the present mandal and zilla parishads (block and district assemblies) are coming to an end on July 21 and 22, and that of the gram panchayat (village assembly) will expire on August 23. For municipal bodies, the term expired in November last year. In fact, the terms of special officers appointed for 85 of the 108 municipalities and 10 of the 16 municipal corporations where elections are due will end on September 29. “It is mandatory to hold elections well in advance before the terms of elected bodies expire,” says Padmanabha Reddy of the Forum For Good Governance, a non-profit that had moved the court in December last year against the appointment of special officers in municipal corporations instead of holding elections. Reddy’s petition is pending with the court.

Since 1994, the state reserves 34 per cent seats for OBCs, and 18.3 and 8.2 per cent for SC/STs. Since percentage of reservation provided to SC/STs cannot be reduced under the Constitution, the government had thought of reducing the quota for OBCs to 24 per cent. But it faced stiff opposition from the communities. “The government will face dire consequences if it reduces OBC quota,” says R Krishnaiah, leader of Andhra Pradesh State Backward Classes Welfare Association. He says surveys show the population of OBCs in the state is much higher—between 45 and 50 per cent of the population—than the government claims.

Several other backward community leaders like Krishnaiah say the government is playing a double game to sabotage the elections. “It is the Panchayati Raj minister Jana Reddy who encouraged the sarpanch association to move the court against the government order,” says Krishnaiah. The elected bodies are mostly dominated by higher communities who oppose such a large reservation for backward communities, he adds.

To tackle the situation the government plans to promulgate an ordinance to appoint in-charge officers for mandal and zilla parishads. This is when the Andhra Pradesh Panchayati Raj Act says special officers can be appointed only for gram panchayats.