Most have not been compensated for land acquired; agriculture and living impacted by pollution 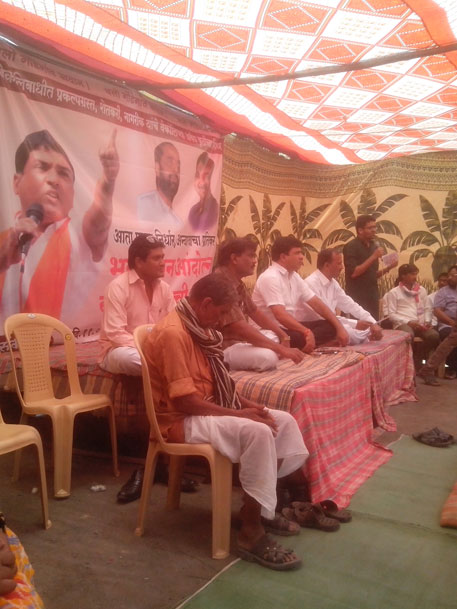 Residents of eight villages affected by the open cast mine operated by public sector undertaking, Western Coalfield Ltd (WCL), at Gondegaon village in Nagpur district are up in arms against the company. They are angry over the company's failure to pay compensation for acquired land, illegal dumping that is making agriculture impossible, and pollution caused by coal dust.
Village residents under the aegis of WeCoLi Badhit Prakalpagrasta Shetkari Nagrik Sangharsha Samiti, led by Shiv Sena MLA Ashish Jaiswal, closed the mine for full eight hours on Sunday, May 11. Hundreds of farmers gathered at the venue and shouted slogans against WCL.

Advocate Gajanan Asole, resident of village Juni Kamptee, said that land from three villages – Juni Kamptee, Gondegaon and Ghatorna – were acquired for the mine in 1994. While Gondegaon residents were compensated at that time, the award for the remaining two villages lapsed due to negligence on the part of WCL, and since then a total of 108 farmers have not been compensated for their land. Around 40 people have not been given promised jobs or pensions. “When we talk about compensation, WCL officials say that they are ready to pay at 1994 rates, which are too low for current times,” he said.

Illegal dumping of mine burden

Apart from this, Asole informed that WCL is dumping mine debris illegally on land not acquired for the purpose. “Land was acquired only for the mine, not for the dumps,” said Asole. “As a result of illegal dumping, land of some 150 farmers in village Warada has become so waterlogged that farmers have not been able to cultivate it for the past seven to eight years.” When asked for compensation WCL officials say that compensation cannot be granted under existing rules, he added.

Asole said that some seven to eight villages are facing heavy air pollution because of coal dust. “Hundreds of trucks of coal ply constantly through the villages without any mandatory precautions like covering, which results in huge amounts of coal dust being released into the atmosphere, resulting in a spate of respiratory diseases in the area.” said Asole, “This coal transport is being carried out without any legal sanction, and WCL has also not bothered to repair our village roads that are getting damaged because of the constant traffic.”

Apart from this, informed Asole, no arrangements have been made by WCL for safe disposal of water pumped from the mine. This polluted water often finds its way into nearby farms.

The agitation was called off after WCL and Maharashtra Pollution Control Board (MPCB) officials visited the venue and promised to look into people's concerns. WCL’s general Manager, land and revenue, A K Singh, assured the villagers that meetings will be held on May 29 and 30, during which the land compensation, job and pollution issues will be resolved.


Judgement: Judgement of the National Green Tribunal regarding air pollution in the area of Wani Tahsil, including Wani town, due to improper activities of excavation, transportation and loading/unloading of coal, 29/04/2014