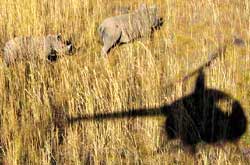 Kenyan conservationists are opposing a government plan to send hundreds of exotic and endangered animals to Thailand in exchange for a few Asian tigers and elephant training assistance. They believe the move will not only harm the animals, but also derail the country's tourism industry. They also doubt the expertise of Thai elephant trainers. But the government defends the deal, citing overpopulation of animals that will be traded.

The deal was worked out in 2004 when Kenyan President Mwai Kibaki visited Thailand but animal welfare activists came to know about it only recently. "It's a political decision," an official in Kibaki's office reportedly said. Kenya's noted wildlife expert Daphne Sheldrick says: "It's barbaric to transfer animals from their natural habitat to captivity...We do not need tigers. They are not indigenous animals. And training of elephants...is abuse of animals."