Animals on the way out 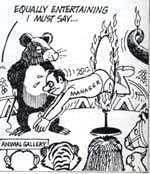 SLOTH bears riding bicycles, leopards jumping through hoops of fire and elephants playing football in the circus ring will soon be a thing of the past. A staggered phase-out of these animals will be done in line with a Supreme Court suggestion in the dispute between the ministry of environment and forests and circus owners on the use of animals in circuses.

The suggestion came after the circus owners appealed for a reprieve from a ministry notification banning the use of animals in circuses on the ground of cruelty, which former minister of state for environment and forests Maneka Gandhi had issued.

The ministry has now allowed the use of only older animals so long as they can perform. Circus owners have been already banned from buying or acquiring new animals. The cubs and sub-adults are to be handed over to the zoological gardens.

Ministry sources claim that owing to a stay on the ban obtained by the circus owners following their appeal, the situation of animals had worsened as even routine action against cruelty was being resisted on grounds of the stay. It is estimated that there are 65-70 tigers, 100 lions, 25 sloth bears, 40 monkeys, 16 leopards and hundreds of dogs and birds with the country's major circuses.