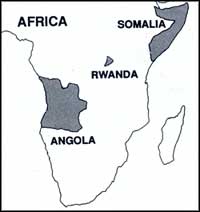 AS THE United Nations labours to clear the mess it has been accused of creating in providing refugee relief in Somalia and in the elections and peace process in Angola, World Health Organisation director-general Hiroshi Nakajima is attempting to pre-empt complaints of still another delay. He called on the international community to tackle the dangerously deteriorating health condition of about 300,000 people displaced by factional fighting in the central African state of Rwanda, which has a population of 7 million. Says Nakajima, "Food and medical supplies are running out and if international support is not immediately reinforced, we are soon going to face another nutritional crisis on the African continent."