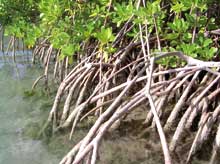 China is going to build another 'great wall', albeit not for military concerns. Its southern province of Guangdong recently announced a plan to construct the country's first green belt. A whopping us $60 million will be spent in planting 50,000 hectares of mangroves in the five-year project that Chinese officials proudly refer to as the "green Great Wall". A major focus of the plan is to save wildlife species.

The significance of the project increases in view of the devastation caused by the typhoon Haitang in the country's southeast coast on July 19, 2005, which affected almost 3.5 million people. Experts believe mangrove forests are one of the best barriers against such disasters. Guangdong's forestry bureau sources say its mangrove expanses have reduced to 3,400 hectares (ha) from nearly 20,000 hectares (ha). The province is also compensating its farmers for helping in the replantation and maintenance of mangroves.