The cyclone, more severe than Helen, is expected to make a landfall on November 28 noon 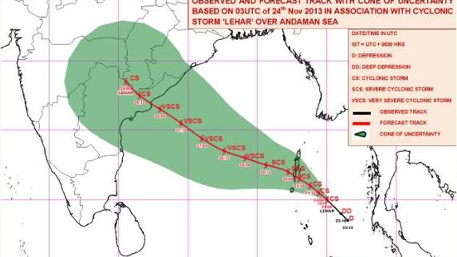 Close on the heels of cyclone Helen, another severe cyclone is heading towards Andhra Pradesh. It is named Lehar. The India Meteorological Department (IMD) sent out a warning on November 24 that that the storm hovering over Andaman Sea will intensify into a severe cyclone and cross the Andhra coast near Kakinada in East Godavari district on November 28 around noon. It will be the third cyclone in the past two months. Helen was preceded by Phailin which hit the east coast on October 12.

The cyclonic storm centred over Andaman Sea has moved north-westward with a speed of 15 km/hour. It crossed Andaman and Nicobar Islands today early morning close to Port Blair. Now it is centred over south-west Bay of Bengal, 1,300 km east-south east of Machillipatnam and 1,230 km east-south east of Kakinada. It is likely to intensify into a very severe cyclonic storm. IMD has issued an orange signal, suggesting the intensity of the storm could be 170 km/hr at the time of the landfall. It may be accompanied by significant flooding of coastal areas. Lehar is expected to be more intense than Helen.

The severe cyclone Helen that hit Andhra Pradesh coast on November 22 has caused extensive damage to agriculture and horticulture crops. As per the state government’s preliminary damage assessment report released on November 24, the state suffered a loss of Rs 1,628.66 crore. About 460,000 hectares (ha) of agriculture crops, mainly paddy, and about 8,700 ha of coconut, banana and vegetable crops have been damaged.

The state government has officially confirmed the deaths of six persons in cyclone-related incidents. More than 25,000 people from about 340 habitations had to be evacuated from the low lying areas of East and West Godavari, Krishna and Guntur districts. Torrential rains continued for 24 hours after the cyclone. The authorities are restoring the damaged power lines and water supply lines.

“ We could prevent major loss of human lives by taking precautionary measures even when Helen changed its course twice before it made the landfall at Machilipatnam,” says C Parthasarathi, commissioner, the state disaster management department. The cyclone was first predicted to cross the coast close to Kavali in Nellore district and then Ongole in Prakasam district and then Machillipatnam in Krishna district. The predictions were changed in 36 hours and Krishna and West Godavari district authorities did not got even 24 hours for evacuation and rescue arrangements. “ But wide publicity was given by the district administrations about the danger of the cyclone to the people and we could minimise the human loss to six.,” says Parthasarathi.

Even though Helen made a the landfall close to Machillipatnam in Krishna district, the districts worst affected were East and West Godavari districts. Strong winds and pounding rains have caused lodging (collapse of top heavy plants because of beating by rain) of ready to harvest paddy crop on 142,012 ha in East Godavari district alone. The loss is estimated at Rs 248.68 crore. In West Godavari, lodging has happened in 102,775 ha. In Krishna, 137,214 ha of paddy crop has suffered lodging. But these can be rescued if rains stop for two days. East and West Godavari districts were worst hit in terms of damage to houses and roads, too. Of the 1,313 houses that were damaged in the cyclone, 990 were in West Godavari and 32 were in East Godavari. More than 1,200 km of roads have been damaged in the cyclone.