Another of the same kind

Geneva Observatory astronomers Study spectral lines in the visible spectrum and detect a planet thefirst to be observed outside our own planetary system - orbiting a sun-like star. The finding might lead to inflow of fresh data on planetary evolution 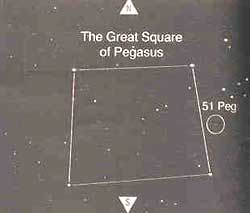 IN THE vast expanses of the universe, the fact that we are the only planetary system around a star would stand out to be against all laws of probability. The chances are that there are many such extrasolar planets in the numerous galaxies which make up the universe. The rub is that since they are so small and so far, their detection is extremely difficult, while imaging them is almost always out of question. Consequently, when two astronomers reported some evidence of such a planet near a sun-like star, it generated much excitement in the community (Science, Vol 270, October 20, 1995).

Michel Mayor and Didier Queloz at the Geneva Observatory have reportedly found the first planet - outside our own solar system - which orbits a sun- like star (in 1994 a planet was found in orbit around a pulsar). The planet is almost half the mass of Jupiter, and is in a tight orbit around the star 51 Pegasi, Just outside the Great Square of Pegasus (a square formed by the stars of the Pegasus constellation). The orbital radius is only about a sixth of that of Mercury, with orbiting period of 4.2 days.

The technique of looking for such small objects is an indirect one. The planet which orbits the star produces a wobble in the orbit of the star. The wobble is detected by the shifting in wavelength of the light emitted from the star's surface. The light from the parts moving towards us is blue shifted, while the light from the portions moving away is red shifted. Mayor and Queloz analysed about 5,000 spectral lines in the visible spectrum and detected the wobble and the presence of the planet.

Another group at the Lick Observatory in the US, headed by Geoff Marcy and Paul Butler, has provided independent confirmation of the wobble in 51 Pegasi. Although any conclusive evidence for the planet is still missing, there is considerable excitement among the planetary scientists. Several effects which could also have caused the wobble are being studied - from an unknown type of stellar pulsation to an unseen binary companion. There is a possibility that standard models of planetary evolution are going to be modified in the light of the data recieved in the course of the discovery of this new planet.