Another village, this time in Odisha, gets official permit to sell bamboo

Though Jamguda was conferred community forest right two years ago, it was not allowed to cart bamboo out or sell it in the market 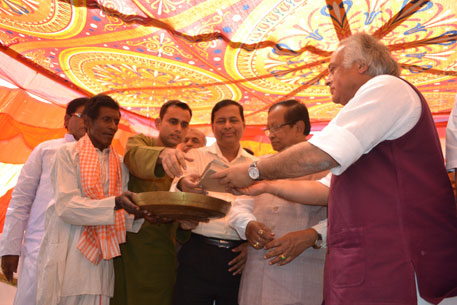 Jamguda in Kalahandi district has become the first village in Odisha and the second in the entire country to get official permission to sell minor forest produce (MFP) like bamboo and tendu leaf. On Sunday, Union rural development minister Jairam Ramesh handed over transit pass book to the villagers that will allow them to transport bamboo and other MFP out of the forest and sell it in the market. The move is expected to economically empower these tribal people who for generations have depended on the local forest for their living but could not sell its produce directly in the market.

In a symbolic gesture, Kalahandi's member of Parliament Bhakta Charan Das, who was present on the occasion along with Union tribal affairs minister V Kishore Deo and Odisha revenue minister Surya Narayan Patra, became the first buyer when he purchased a truckload of bamboo poles for Rs 3,000 with the help of transit pass. It may be recalled that Das was prevented from carting away the bamboo he had purchased from Jamguda last year by forest department officials who insisted he needed a transit pass first. The village was conferred community rights over 123.50 hectares of local forest under the Forest Rights Act (FRA) in 2010, but could not exercise control over minor forest produce in the absence of transit passes.

Ramesh said that it was a historic day for the villagers of Jamguda as it was only the second village in the country after Mendha Lekha in Gadchiroli district of Maharashtra. “Jamguda is the first in Odisha and the second in the entire country where transit pass book has been provided to the tribal people to harvest and transport bamboo to improve their livelihood,” Ramesh said. As to why he chose Jamguda, the minister said that the village was bamboo-rich and at least 70 per cent of the villagers depended on bamboo.

“Ever since licence was granted for harvesting and selling of bamboo to Mendha Lekha village residents, the gram sabha there has done a business of Rs 1 crore. This village, too, has that potential. We also see the initiative as a measure to curb the Maoists. In Mendha Lekha, the Maoists were so panic-stricken by the power of the gram sabha, they even kidnapped the community leader Devaji Tofa. We are focussing on the Maoist-infested districts to improve the quality of life of the tribals so that they don’t fall prey to the Maoists. I want to see that the rural development department and tribal affairs department work together to free the tribals from Naxals and nasha (liquor),” he said.

Minimum support price for MFP in the offing

Tribal affairs minister Deo said that the Indian Forest Act (IFA) of 1927 prior to the FRA had provisions that granted exclusive rights to the forest department to sell minor forest produce. “The Forest Rights Act of 2006 supersedes this provision of the IFA,” he said. Deo informed that the government was thinking about minimum support prices for the various MFP like mahua, harida, bahada and amla.

Manhar Majhi, a tribal of Jamguda said that the transit pass would make his life easier. “I entirely depend upon bamboo for my livelihood, but I can’t sell it due to the constraints by the forest department. Now I am happy that I can sell bamboo anywhere and hope to get a better price,” he said. A visibly happy Nilambar Patra, president of the gram sabha who received the transit pass, said that though they harvested bamboo in large number, they faced problem during procurement by the forest department. “Earlier, we used to get Rs 5 per pole, but now we will get almost double. From now our people will be able to sell bamboo freely,” he said.

Revenue minister of Odisha, Surya Narayan Patra said that Odisha government was very concerned about the rights of tribals. “We are the first state in the country where maximum numbers of tribals were given patta under FRA in a very short period. We are taking steps to give land entitlement to more tribals under the FRA in near future,” he said.