Antarctic Treaty meet steps up efforts to save marine ecology 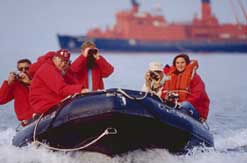 Scientists and policy-makers at a 10-day Antarctic Treaty consultative meeting, held in Edinburgh, have agreed upon new measures to reduce the risk of non-native species being introduced into both marine and terrestrial ecosystems in Antarctica.

The meeting, which ended on June 23, decided not to allow ships operating in the southern Ocean to empty their ballast water into the sea, as microbes-laden water might introduce alien species to the wilderness. Delegates expressed concern as the rapidly changing and warming climate on the Antarctica peninsula could now increase the risk of non-native species establishing themselves on the continent itself. The meeting, however, failed to take any concrete decision on the tighter environmental measures to protect the continent amid a boom in tourism. Experts see the failure was due to pressure from the growing tourism industry across the world.