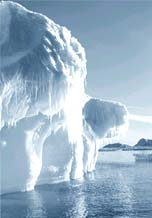 a big chunk of Antarctica has been melting for thousands of years. This situation is likely to continue until it swamps millions of kilometre of coastland, scientists of the University of Maine said. But, surprisingly global warming is not the culprit. "During the last Ice Age, the West Antarctic Ice Sheet ( wais ) was 1,300 km larger," one of the scientists said. Reporting in the journal Science , they said its complete collapse would raise the global sea level by 5 to 6 metres.

"Collapse appears to be part of an ongoing natural cycle, probably caused by rising of the sea level initiated by the melting of the Northern Hemisphere ice sheets at the end of the last Ice Age," says Howard Conway, a geophysicist at the University of Washington who led the study. But in other areas that are melting the causes have not been so clear. Sometimes changes in currents, or in the way water washes under the ice, can affect melting.