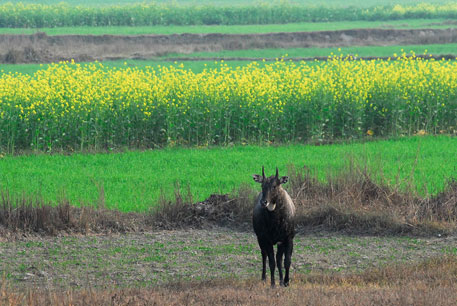 A different kind of head-hunting is on in Bihar. For the third consecutive year, the Bihar State Wildlife Board has allowed the farmers to shoot and kill Neelgais rampaging through standing crops. The government is offering attractive packages for hunting down the animal that has become a menace for the government and the farmers alike. It has decided to provide arms licence to farmers of the affected villages and promises to pay Rs 500 for each bullet fired and Rs 1,000 for the burial of each animal hunted.

The animals generally forage in the fields during monsoon and winter months. Mostly, the incidents coincide with the monsoon and winter sessions of the Legislative Assembly. This has prompted the local MLAs from Buxar, Arrah, Bettiah and adjoining districts, to raise their voice against this menace in most sessions.

The neelgai menace is not just restricted to the farmlands. The largest Asian antelope has made its presence felt at the Gaya airport and Jayprakash airport in Patna. In the last few years, flights have been delayed and aircraft take-offs abruptly stopped after animal-spotting on the runway.

Forest and environment secretary, Deepak Singh says efforts are on to seek the opinions of wildlife experts to deal with the matter. The department has decided to extend the previous measure of shooting down rampaging neelgais in want of any other suitable measure as of now. “We do not want to issue any such measures. But the department has no solution to control the damage caused by the neelgais. We would invite experts to provide us with a solution to keep neelgais in their natural habitat,” he says.

The forest department is also weighing a bunch of options to control the menace. B N Jha, principal chief conservator of forests, says neelgais have been harassing the farmers for the last 10 years. Farmers have refrained from killing them because of strict laws against killing neelgais and mass awareness generated by forest department. The department is now planning to start a slew of measures, including controlled culling of neelgais. “Culling is needed to have a balance between population of the animal and their natural habitat,” says Jha.

Jha cites two reasons that might be at the root of this problem: either the birth rate of the neelgais has spiralled or they are not able to find enough food in their habitat. Senior officials point out that in entire Bihar farmlands have spread into restricted zones, encroaching upon the natural habitat of neelgais. Bihar has a sparse forest cover of only 7.27 percent of its total land. Last year, forest cover reportedly grew by 0.3 per cent.

Forest department officials are also disappointed with the miniscule number of non-profits and experts working in the area of forestry in the state.

Crop destruction by neelgais is not confined to Bihar. States like Rajasthan, Madhya Pradesh, and Uttar Pradesh are also reeling under the problem. Jha believes there needs to a national-level deliberation to solve the problem.