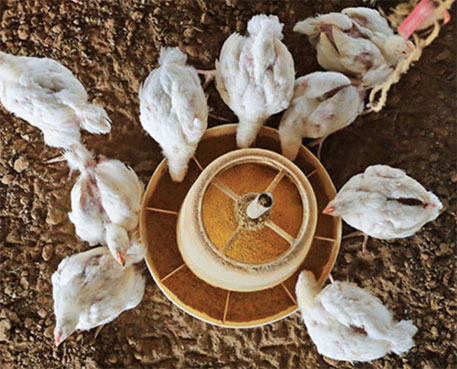 The study by Delhi non-profit Centre for Science and Environment that found antibiotic residues in chicken found mention in the current session of Parliament when Rajya Sabha MP Digvijaya Singh sought some answers from the Union Ministry of Agriculture on December 5. Singh asked about the action taken by the ministry after CSE research revealed that 40 per cent of chicken samples tested in Delhi-NCR contained residues of antibiotics.

Union agriculture Minister of Agriculture Radha Mohan Singh said, in a written statement, that an advisory had already been issued by the Department of Animal Husbandry, Dairying and Fisheries (DADF) on June 3 this year, discouraging the use of antibiotics in animal feed and maintaining of withdrawal periods.

Another circular was issued by the DADF on December 2 to the heads of the animal husbandry departments in states and Union Territories. It acknowledges the presence of residues of ciprofloxacin, enrofloxacin, doxycycline, oxytetracycline and chlortetracycline in poultry meat. The same antibiotics were detected in the chicken samples in the CSE study.

The December circular says antibiotics should not be allowed for use in feed/feed supplements. It also suggests limiting antibiotic use in food-producing animals through measures such as encouraging strict biosecurity measures and alternate growth promoters, registration and licensing of antibiotics, and education of veterinarians and poultry farmers on the ill effects of indiscriminate use of antibiotics.

The circular, however, has a major loophole. It states that antibiotics for prophylaxis/metaphylaxis (prevention of disease) may be used under the supervision of veterinarians. The CSE report suggests that the practice of using antibiotics for mass disease prevention (one of the non-therapeutic uses of antibiotics; the other is growth promotion) contributes to the development of antibiotic resistance (ABR) and all non-therapeutic use of antibiotics should be banned. A policy paper published by the National Academy of Sciences also acknowledges the grave threat to human and animal health due to the transfer of ABR via the environment.

According to CSE, ABR, as a public health concern, is not limited to the presence of antibiotic residues in meat. It also relates to the creation of reservoirs of resistant bacteria from the use of antibiotics in animal husbandry. Resistant bacteria can be transferred from food-producing animals to humans through food, direct contact and through the environment.

While the advisory issued by DADF asks the state animal husbandry departments to limit ABR resulting from antibiotic use in food-producing animals, it has left the implementation of measures to them.

No standards for antibiotic use in poultry and cattle

On November 28, Vinod Kumar Boianapalli and Kambhampati Hari Babu, MPs from Telangana and Andhra Pradesh respectively, raised a question on chemical and antibiotic residues in animals in the Lok Sabha (as an unstarred question). The question sought details of regulation and monitoring mechanisms to monitor these residues in poultry and other cattle reared for meat. In reply, Union Minister for Health and Family Welfare Jagat Prakash Nadda mentioned the limits for antibiotics and other pharmacologically active substances for fishery products instead.

It is important to note that the Food Safety and Standards Authority of India (FSSAI) has no such standards for poultry or cattle meat. Standards are in place only for seafood. Moreover, FSSAI, in 2010, notified tolerance limits for only four antibiotics—tetracycline, oxytetracycline, trimethoprim and oxonilic acid—in fish and fishery products.

The same day, Raksha Nikhil Khadse and Prem Singh Chandumajra, MPs from Maharashtra and Punjab respectively, asked in the Lok Sabha (as a starred question) the total quantity and value of antibiotics imported from China and other countries during the current year and the last three years. They also asked about the mechanisms put in place by the government to ensure the quality of imported drugs.

CSE, during its field research, obtained antibiotics such as ciprofloxacin and doxycycline in kilograms without a prescription. They were unlabelled and had no expiry date, which means they could have been manufactured in India or imported from another country. It exposed the lacunae in the implementation of governmental regulations on the import and sale of antibiotics.