Will you suffer a heart failure or a paralytic stroke? A laboratory test can tell you years before it happens and help you avert it 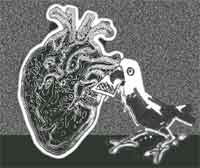 a team of researchers from the us has developed a blood test that would help identify people likely to suffer heart failure or stroke (such as paralysis) years before the appearance of warning symptoms. Doctors will be able to take preventive measures and avoid future emergencies, say the researchers. Results also indicate that inflammation in the walls of blood vessels, which leads to their hardening and narrowing, is a stronger reason for heart attacks and strokes than high levels of cholesterol or high blood pressure ( New England Journal of Medicine , Vol 336, No 14).

Paul M Ridker and his team from the Division of Preventive Medicine, Brigham and Women's Hospital, Boston, conducted the study on 1,086 apparently healthy men. The researchers studied 543 men who subsequently developed myocardial infarction (heart failure), stroke, or venous thrombosis (formation of clots in blood vessels).They also studied 543 participants who did not report vascular disease during the eight-year follow-up period.

Levels of creactive protein, a substance found in plasma that is a general indicator of inflammation, were measured in all the cases. The results showed that participants with high levels of creactive protein were thrice as likely to develop myocardial infarction and twice as likely to have a stroke compared to those with lower levels of the protein.

The researchers say that it is possible to identify the risks of a person having a heart attack or a stroke as many as eight years in advance. If inflammation in blood vessels is a greater cause of hardening in the arteries than high cholesterol or high blood pressure, then pharmaceutical firms need to focus on medication that reduces inflammation of blood vessels, and not only on drugs that lower cholesterol levels and blood pressure.

The investigators also evaluated the effectiveness of aspirin in preventing heart attacks and strokes. They found that aspirin's usefulness is not due to its ability to prevent blood clots, as scientists have long believed, but in its ability to stem inflammation of blood vessels. Both these findings may change the way physicians look at heart ailments. The levels of creactive protein will help them detect the disease process much before the blood vessels get clogged. With the present state of knowledge, by the time a cardiologist diagnoses badly blocked vessels, the disease is advanced enough to require surgical intervention such as a bypass operation or angio-plasty. And there is no guarantee that the vessel will not get blocked again.

Ridker says that the important part of the study is that doctors can see signs of inflammation much before the disease reaches an advanced stage, says Ridker. According to the conventional view, heart attacks and strokes are caused by high blood pressure and high levels of cholesterol in the blood. This leads to fat deposits on blood vessel walls - a condition called athero-sclerosis. Eventually a blood clot becomes lodged in that narrowed vessel cutting off the supply of oxygen to the heart or brain.

The study does not dispute other risk factors for heart disease such as high levels of cholesterol. It only suggests that greater emphasis needs to be given to inflammation of blood vessels, which can be caused by overactive immune system cells lodged in blood vessels. The researchers say it is possible that many heart attacks are caused by bits of scarred tissue that break away from an inflamed vessel wall and lodge in it.

This study shows for the first time that atherosclerosis is a biological process and not just a matter of mechanical blockages. This also explains why the blockage that precipitates the attack is often not in one of the narrowed vessels, although heart attacks usually happen in people with narrowed arteries. Blood vessels are now being viewed as tissue trying to heal itself of an injury, and not merely as clogged pipes.