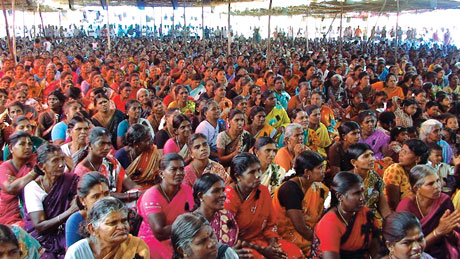 MONTHS before its expected date of becoming operational, the Koodankulam nuclear power plant in Tamil Nadu’s Tirunelveli district has earned the ire of people living nearby. On August 15, three gram sabhas passed resolutions asking for its closure. About 60,000 people live within 10 km of the 2,000 MW plant, expected to be operational by 2011-end.

The flash point for the resolutions in Koodankulam, Levinjipuram and Idinthakarai villages was the commencement of the hot run of the reactor a few days earlier. Hot run is a test run that takes place before the reactor is loaded with actual uranium-rich fuel.

On August 13, an article appeared in a Tamil daily giving details of what the public should do in case of an accident at the plant. The public was instructed to find shelter at the first bell, and consume iodine tablets among other things at the second bell. This was published only in the Nagercoil edition (Kanyakumari district) and not in the Tirunelveli edition, says S P Udaykumar, an anti-nuclear activist. “This got people concerned about the plant’s impact. Fukushima has educated people about the hazards of nuclear power,” he adds. On August 16, about 10,000 people gathered in Idinthakarai for a hunger strike. A similar strike was planned in Koodankulam the next day but permission was denied. So a strike was held at a church. “At this point the administration asked us to submit our demand to the District Collector and hold protests till October 7 by which time the government would reply,” says Siva Subramanian, an advocate campaigning against the plant.

Till now only the fishing community has been protesting the plant.

Everyone else, in the hope of getting work, has been quiet, says M Pushparayan, convener of Coastal People’s Federation, a network of activists and fisher leaders. Since 2001, only 90 people from Koodankulam and nearby village Chettikulam have got permanent jobs in the plant. Another 1,000 were hired temporarily, says a Koodankulam resident.

Activists have been campaigning against the plant for more than eight years. No public hearing was held for two of the six reactors. “Neither was the environmental impact assessment or the safety analysis report shared for the reactors,” says Udaykumar (see ‘India’s nuclear chimera’, Down To Earth, August 1-15, 2010).

Despite repeated attempts, no official from the power plant commented on the issue.