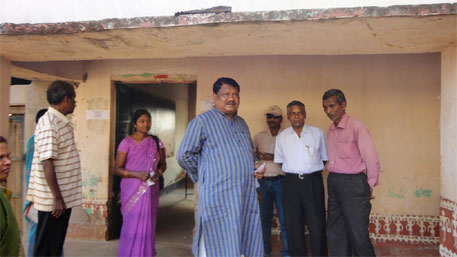 Residents of a few villages of Odisha are hoping that the new tribal affairs minister Jual Oram will be able to save their land and betel vines from the clutches of South Korean steel company Posco. These villages include Dhinkia, Gadakujang and Nuagaon gram panchayats in Jagatsinghpur district of the state.

"I spoke to Jual Oram over the phone on Monday and he assured us that he will not allow Posco to build the steel plant by displacing thousands of villagers. Oram also assured me that Posco will not get Khadadhar hillock of Sundargarh district for mining lease,” said Abhaya Sahoo, president of Posco Pratirodh Sangram Samiti (PPSS).  Interestingly, Oram is also India's first tribal affairs minister. He was elected in the Atal Bihari Vajpayee government in 1999.

“The senior BJP leader Jual Oram had visited the affected villages to boost the anti-Posco government. We shall be meeting the minister soon in Bhubaneswar or New Delhi to press our demands,” added the activist.
“Earlier, Oram had strongly opposed Congress-led UPA’s decision to lease out Khandadhar iron ore reserve to Posco because a large number of tribals would be affected. The tribal leader also opposed the move of the UPA- and  BJD -led state government to hand over fertile land in our areas to the steel giant”, said Sishir Kumar Mohapatra, general secretary of PPSS.

Oram, a firm opponent of Posco
“Last time Jual Oram visited Dhinkia on December 19, 2011, he stated that the Posco project was a legalised loot of state’s natural resources. In 2005, he became the first person to oppose Naveen Patnaik government’s move of signing a MoU with Posco. He also criticised government’s decision to provide water to the company from the river Hansua and Mahanadi,” said Mohapatra.

Expressing a counter view, senior BJD leader and MLA of Earasama- Balikuda, Prasanta Muduli, said, "People of the proposed steel plant site have expressed solidarity in favour of the Posco project and as a result, the land acquisition process has already been completed  peacefully.” He also mentioned that the residents of Dhinkia and other villages had rejected the PPSS-sponsored CPI candidate Abhijit Sahoo.

Posco has already begun work on boundary wall on the project site. The proposed steel plant project got a boost when the district administration completed the land acquisition work by acquiring 2,700 acres on July 4 in Dhinkia, Nuagaon and Gadakujang gram panchayats.

POSCO had earlier proposed a 12 million tonne per annum (mtpa) capacity steel plant. But later the steel company had whittled down the project to eight mtpa and sought minimum 2,700 acres of land to start construction.  The US $12 billion steel project is billed as the country's biggest FDI project.

The Rehabilitation and peripheral Development Advisory Committee (RPDAC) would soon be organised to discuss the demand on revision of compensation and resettlement”, added Muduli.