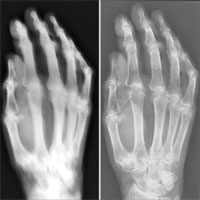 Scientists have pieced together remains of Xray equipment dating shortly after the discovery of the rays in 1895.

Researchers from the same Dutch town where the system was originally built used it to produce striking images that belie its simplicity and age. The team said the images required a radiation dose to the subject 10 times higher than a modern X-ray. The original system was developed by high school director H J Hoffmans and local hospital director Lambertus Theo dorus van Kleef from Maast richt in the Netherlands.

Weeks after a publication by X-ray discoverer Wilhelm Roentgen, the pair built their device from parts found at the high school and used it for anat omical imaging. The mac hine ended up in a warehouse in Maastricht and its parts were recovered last year for a history program me on television. The device has now become a medical and theatrical showpiece.