Ants in their pants 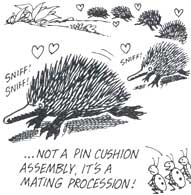 PEGGY Rismiller of the University of Adelaide has unveiled the sexual exploits of the elusive and solitary egg-laying Australian mammal, the spiny anteater or echidna, which might help to successfully breed them in captivity.

Rismiller found that during the breeding season, which occurs in winter, 10 or more males form a "train" to woo a solitary female, following her for between 14 to 36 days, during which each male tries to make advances to her (New Scientist, Vol 142, No 1923).

When the female becomes receptive, she lies on her stomach and partly buries her front legs and head into the ground. The ardent suitors dig a trench around her, nudging each other away till only one remains. Only after 4 hours of foreplay does mating start; and it lasts for as long as 3 hours.